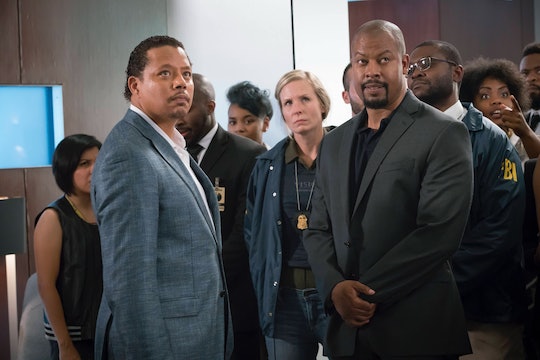 Just when viewers think they're in a standard episode of Empire — filled with the usual 40 plus minutes of drama and music — one character goes and stabs another in the neck. Wednesday's episode, part one of two of the season finale "Toil & Trouble," was one such instance. Throughout the episode, it seemed that Lucious and his half-brother, Tariq, were actually joining forces for once. As one can guess, though, it was too good to be true. In the final scene, Lucious' mother, Leah, came up and stabbed Tariq. So is Tariq dead on Empire? Leah really had it out for him and the outlook doesn't look good.

The audience already knows Leah isn't the most understanding person, but does she really hate Tariq enough to try to kill him? This is Lucious' mother we're talking about, so the answer is yes. Her actions were foreshadowed earlier in the episode, when she tried to put glass in his food when he came to the Lyon house for lunch. Leah called Tariq "Fatima's bastard," in reference to his mother, and said he wasn't allowed in their home. When Lucious and Tariq were at odds with each other (so basically, last week and every week before), this side of Leah didn't come out. Once Lucious reached out for Tariq's help to find baby Bella, though, her claws showed.

Up until now, Tariq was Lucious' brother in blood only. In fact, Tariq was a FBI agent trying to take down Lucious and put him in jail. He even fostered a relationship with Lucious' wife, Anika (which backfired, because Lucious usually knows when something's up). Once Hakeem and Anika's child, Bella, was taken away by Child Protective Services, however, Tariq and Lucious' relationship changed. On Wednesday's episode, Lucious wanted to make amends because he needed Tariq's help to find Bella. Tariq obliged, and actually found where the baby was.

Unfortunately, though, the Lyons may not be able to find out anytime soon because Leah stabbed Tariq in the neck right before he was going to reveal Bella's location. Is Tariq dead? Honestly, his outcome looks bleak: it's not likely that someone stabbed in the neck and bleeding out will survive. While viewers will have to wait until next week to know for certain, they can assume it's not good. Even if he does survive, he may not regain consciousness soon enough to tell the Lyons where Bella is.

Empire truly went back to their Shakespearean roots with this one. There's a small chance Tariq lives, but it's a chance nonetheless — and hopefully if he does, it leads to Bella's safe return as well.