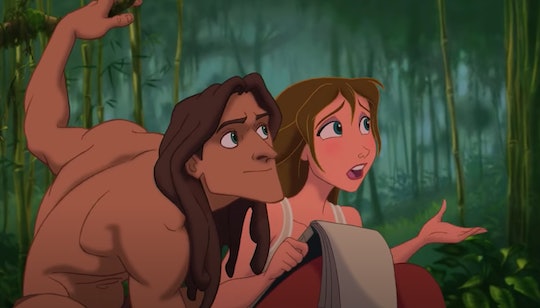 The 'Tarzan' Movies Are Finally Coming To Disney+

While the library is pretty expansive already and has enough movies to keep families entertained for months, Disney+ will be adding the Tarzan movies to it in just a few short weeks. Indeed, the 1999 animated film that was a staple in so many homes growing up can soon make its way into your home's streaming rotation, too.

Tarzan and its 2005 prequel Tarzan 2 will debut on Disney+ on Friday, June 26, 21 years after the first film premiered in movie theaters. And if you're not great at remembering dates, you can add the movies to your watch list on Disney+ right now in preparation for its debut.

Disney's colorful story of a man raised in the jungle by apes and his first interactions with mankind is one of those classic Disney films everyone loves. After all, it's got talking animals, stunning visuals, and an amazing soundtrack featuring songs written by the one and only Phil Collins. The movie was a big hit at the box office when it was first released two decades ago, and was the first animated Disney film that included songs that were not sung by the characters, according to CNN.

If you simply can't wait until June 26, Tarzan has been streaming on Netflix for the past two years and is currently available to watch. The movie arrived on Netflix in June 2018 but will be leaving on June 22 this year. But once Tarzan makes its way to Disney+, it will be in good company with other animated films from the "Disney Renaissance" — the period of time between 1989 and 1999 that produced some of the most beloved Disney films.

Until Tarzan finally makes its home at Disney+, you can continue to stream it on Netflix or purchase the film on Amazon Prime for $16.99. Either way, be prepared to have "You'll Be In My Heart" stuck in your head for the foreseeable future.