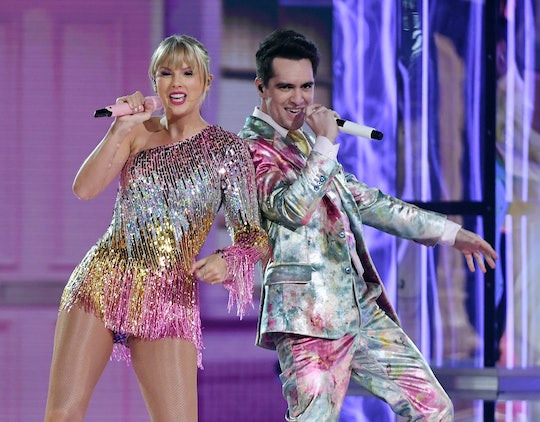 Is Taylor Swift Going To The 2019 Met Gala? Swifties Have Their Fingers Crossed

Between dropping a new single (complete with an awesome video, to boot) and performing at the Billboard Music Awards, plenty of music fans probably have T-Swift on the brain. And really, can you blame them? Both her video and the live performance with Brendon Urie were simply amazing. It's no wonder "ME!" broke the all-time Vevo record within the first 24 hours alone. As Monday, May 6 approaches, Swifties are likely wondering: Is Taylor Swift going to the 2019 Met Gala?

On Monday, New York's Metropolitan Museum of Art will hold its annual, by-invitation-only fundraiser: The Met Gala. The big shebang is not only a glamorous red carpet event during which the biggest celebrities parade in wearing expensive gowns — it also benefits the museum's Costume Institute, according to CNN. Because of the whole invitation component, it's difficult to say, for sure, who will show up on the red carpet each year. However, considering her newly released single, "ME!," along with her upcoming album, plenty of fans are hopeful that Taylor Swift will be among the celebrities parading in this year. The fact that Swift has attended the Met Gala multiple times in years past doesn't hurt her chances of making an appearance, either.

As E! Online reported, Swift attended her first Met Gala back in 2008. She also showed up in 2010, 2011, 2013, 2014 — and in 2016, she was the co-chair alongside Idris Elba, according to Vogue. So yes, T-Swift definitely no stranger to the Met Gala. And based on an increasing number of Twitter posts, I have a feeling fans will be pretty disappointed if Swift sits this year out. One Twitter user recently wrote, "PRAYING that @taylorswift13 makes a #MetGala appearance this year!!!!"

Yet another person tweeted, "Fingers crossed for a #TaylorSwift appearance at the Met Gala."

Some fans have even resorted to hounding Swift via social media to get her to spill the beans over her plans for Monday evening. But alas, the cat-loving singer has yet to respond to the incessant pestering. (And honestly, I don't blame her.)

If you ask me, T-Swift fans have been a tad spoiled lately. Between the new video and the promise of yet another album — not to mention the fact that she opened for the Billboard Music Awards alongside Panic! At the Disco's Brendon Urie — the past week has practically been a Swift love fest. But that's the thing about Swifties; they're always wanting more. If you're hoping to spot Swift (and if she adheres to this year's theme, “Camp: Notes on Fashion") be sure to tune into E!'s Live From the Red Carpet: The 2019 Met Gala special starting at 5 p.m. ET.

For the record, as far as I can tell, Swift has not indicated one way or another whether she'll be attending the 2019 Met Gala. So I guess we'll just have to tune into the red carpet coverage on Monday to find out!