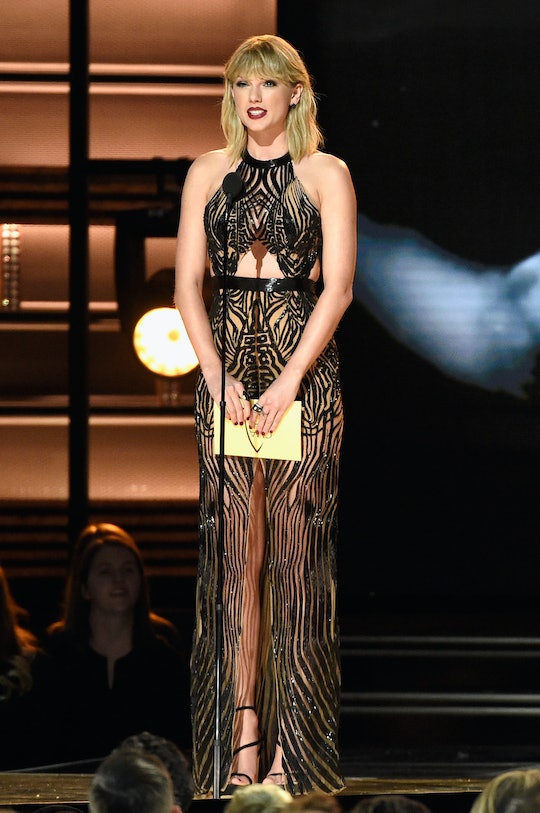 Here's Why Taylor Swift's 'Reputation' Isn't Eligible For A 2017 Grammy

Both fans and critics were obsessed as soon as Reputation hit shelves in early November, selling more than one million copies in its first week. So many music fans were leaving many wondering if Taylor Swift's Reputation would be eligible for a 2018 Grammy nomination. Unfortunately, due to the late release date and the award's unique evaluation period, the album won't be Grammy eligible until 2019. But that doesn't count Tay Tay out of the running for Grammys for good. Some of her past projects and collaborations may have her adding to her running count of Grammys after all.

Taylor Swift currently holds 10 Grammy Awards and has been nominated 31 times, according to the Recording Academy's official total. Her record-breaking sixth studio album was released on Nov. 10, just short of the 60th Grammy Awards' window of Oct. 1, 2016 to Sept. 30, 2017, according to Refinery 29. That means that earlier albums released around the same time, such as Lorde's Melodrama and JAY-Z's 4:44, are in the running, Swift's new release will have to sit this one out.

Many may be disappointed to hear that Reputation isn't up for nomination, and the bad news doesn't end there. The album's single "Look What You Made Me Do," released on Aug. 24, was eligible for nomination, but went without nomination nonetheless.

Slipping a single into the Grammy eligibility period is nothing new for the artist. As the L.A. Times pointed out, Swift's singles for both of her albums 1989 and Red were released in time to be evaluated one whole award cycle ahead of the actual albums. But unlike "Look What You Made Me Do," both “We Are Never Ever Getting Back Together” and “Shake It Off” were nominated and went on to win Grammys.

Fortunately for all of the Swifties out there, even though Reputation was left out, the artist did walk away with two nominations. Variety reported that she was nominated for Best Song Written For Visual Media for her duet with ZAYN “I Don’t Wanna Live Forever,” made for the film 50 Shades Darker, as well as Best Country Song for "Better Man," the song that she wrote for Little Big Town. "Better Man" in particular has done well this year, as it is the current frontrunner for the Country Music Awards' Song of the Year, according to Gold Derby.

Some believe that Swift's vendetta-style song list on Reputation has hurt the album's chances of going on to win awards. Specifically, her choice of enemies could rub the Grammy jury the wrong way. An unnamed inside source in the music industry reportedly told The Sun that, “A lot of people on the voting committee are not liking Reputation at all." Despite Swift's likely desire to win as many awards as possible, the source said that her rivalries with others in the business may come back to haunt her:

A lot of the jury members have worked with Katy, Calvin, and Kanye so when Taylor has tried to humiliate them, it has left a bad taste. Ultimately she may pay for that when it comes to winning awards ... How Taylor thinks the industry is going to give its full support to her after she’s tried to damage so many people is mad.

While any explanation of why Reputation wasn't nominated beyond missing the cutoff period remains speculation, the fact that Swift is still in the running somehow is enough to give fans hope. Considering the success of Reputation, it could very well get a few nods in the next round. Until then, those two nominations will have to be enough. Fingers crossed.