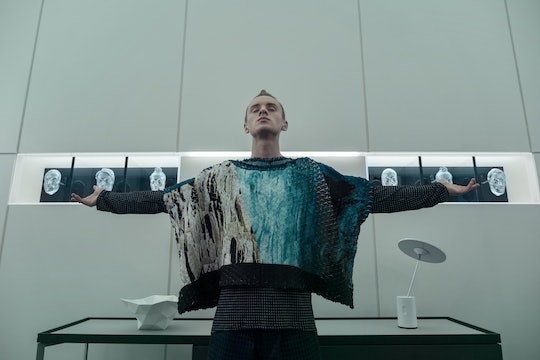 Technical Boy has not been having a particularly good time in Season 2 of American Gods. The rebirth of New Media disrupted Team New Gods, rearranging loyalties and putting Technical Boy on the chopping block. One too many slip-ups may have cost him his life in Episode 4. But is Technical Boy really dead on American Gods?

Technical Boy hasn't been on Mr. World's good side for a few episodes. Though one might think surveillance is something that falls under his technological purview (Mr. Robot has me thinking all of our devices are watching us back at all times), he wasn't able to use his powers to locate Shadow. Instead, Mr. World sent him and New Media after the many-eyed god Argus so that he could find Shadow instead. But Technical Boy flopped at getting information until New Media stepped in and used Argus' many cords to her advantage.

Technical Boy's fail tour continued in Episode 4, where he couldn't even get an old friend to help him create Mr. World's surveillance network. As punishment, Mr. World put him away. But it doesn't seem like Technical Boy is gone for good. Per Mr. World's own words, he has only been "retired." This isn't the end yet.

At the conclusion of "The Greatest Story Ever Told," Technical Boy attempts to flee from Mr. World because he'd been deemed obsolete. Maybe it was New Media's cyber bullying that put him off his game (undermined by a mocking pig emoji, alas!), but despite being the god of technology, Technical Boy isn't able to create new technology when the moment calls for it. As he's running, he stumbles upon a curious little box. The box opens of its own accord and launches itself at his face, then seems to consume him; by the end of the scene, the box is tightly closed on the ground and Technical Boy is no more.

But that box, or cube, has made an appearance before. Way back in the pilot, Shadow found one waiting for him after leaving the cemetery where Laura was buried. It behaved in exactly the same way: it lit up, unfurled, and jumped onto his face like a mask. However, it only transported him into Technical Boy's all-white limo-style lair, where they had a tense conversation that ended in Shadow almost being lynched. The cubes are Technical Boy's devices.

There are a few things that could mean. One, it's likely the cube didn't kill him, but only imprisoned him. Two, since Technical Boy created them, they should be pretty easy for him to break free from. He might just be chilling in his own private world until he finds a way out again. Getting rid of a god can't be as easy as putting them in a box in the closet; killing one has been proven to be bloodier than the fate Technical Boy suffers in "The Greatest Story Ever Told."

New Media may have usurped Technical Boy's place in the New God hierarchy for now, but I doubt he'll be gone for long. And he might not be interested in playing nice when he comes back.