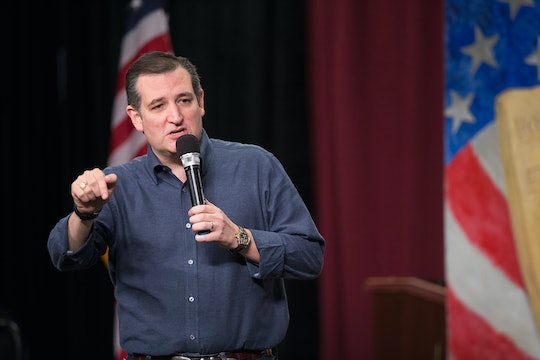 Is Ted Cruz Eligible To Run For President? It's Actually A Tough Call

Ted Cruz has had a rough week. First, he was in trouble for calling out Donald Trump for his "New York values." Then, there are people questioning whether Cruz is eligible to run for president, since he was born in Canada. The question is actually more complicated than it seems.

Here's the thing: the Constitution says that "No person except a natural born Citizen . . . shall be eligible to the Office of President." And Cruz is not a natural born citizen. He was born in Canada. But since his mother is an American, he didn't have to go through a long, arduous naturalization process. The Supreme Court has never weighed in with a strict definition of "natural born," so it's up to intrepretation whether or not Cruz can claim that status.

He's obviously an American citizen. But he might not be a natural born one. A Texas lawyer, Newton Schwartz, filed suit this week to get to the bottom of whether or not Cruz could even run. Schwartz writes:

For his part, Cruz didn't even know that he still had Canadian citizenship until the Dallas Morning Star looked into a few years ago. In 2014, he renounced his Canadian ties. He's lived in Houston since he was four.

This is all comes as Cruz is starting to creep up behind Trump in the polls. And Donald Trump doesn't respond well when he starts losing. In fact, he's been gloating on social media all day about the lawsuit probing into Cruz's eligibility. That battle is heating up, especially after Cruz said that Trump had "New York values." The Daily News responded by running a headline this week saying "Drop Dead, Ted," with the Statue of Liberty giving him the middle finger, telling him to "go back to Canada."

On social media, Cruz has little sympathy for his New York comments, but some feel bad that his citizenship is being questioned:

Of course, America knows Trump loves birther scandals. He was the one who led the charge into President Barack Obama's ancestry. But this time it feels more personal, since he's directly trying to take down an opponent.

While it's up to the Supreme Court to decide what "natural born" really means, it's probably safe to assume that Cruz, a naturalized citizen since birth, will probably be allowed to run for president. Whether you agree with Cruz or not, you have to feel for anyone in Trump's line of fire. Trump is serious about making him look like a fool. A Canadian fool.