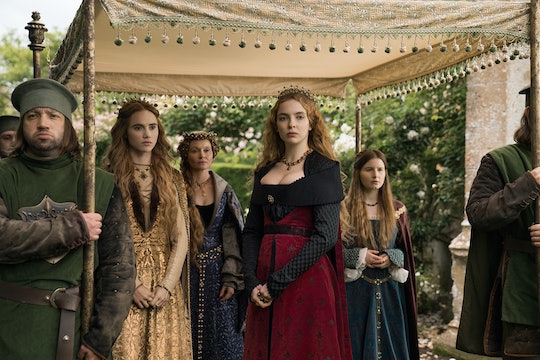 Is Teddy From 'The White Princess' Based On A Real Person?

When viewers started watching The White Princess, they knew they were in for a historical drama starring Elizabeth of York and her husband, Henry VII. What they may not have known, though, was how much they'd come to care about all the other characters in the royal family as well. One example is definitely Teddy, Elizabeth's young cousin. On the second episode, Henry locked him in the Tower of London... and he's still up there. With such mistreatment of a child, viewers may be wondering if Teddy actually existed in history. So is Teddy from The White Princess based on a real person? Elizabeth is trying to save him from the tower.

Like the majority of characters on the show, yes, Teddy is based on a real person. His name was Edward Plantagenet, 17th Earl of Warwick, and he was, in fact, Elizabeth's cousin. On the show, Teddy wasn't happy that Henry ascended to the throne. Henry killed Teddy's uncle, King Richard III, in battle, ending the longstanding war between the Tudor and York families and taking over the crown in the process. Teddy, being a cocky little boy, said out loud in front of Henry that he could still be king one day. That, combined with the fact that the people of London had an affinity for him, made Henry feel threatened by Teddy.

The same thing happened in real life: after Richard III's death, Henry didn't like having Teddy around. Just like it happened on The White Princess, Henry locked Teddy in the Tower of London out of fear that he could usurp his power. He was 10 years old at the time. In actuality, he only left the tower twice after Henry imprisoned him. Once was to parade around London to disprove an imposter pretending to be Teddy. The second was, unfortunately, his beheading. When Teddy was 24, he was accused of trying to escape the tower. After pleading guilty, he was killed.

Will Teddy on The White Princess have the same fate? As of now, it's uncertain. While the show follows most of what happened in history, it's not a straight retelling. It's also based on historical novels by Philippa Gregory. It's possible, then, that it may go into more fictional territory and Teddy may live. One possibility is that Elizabeth succeeds in convincing Henry to let him out of the tower. Teddy may have had an unfortunate end in real life, but viewers will have to keep watching to see if The White Princess mirrors that tragedy.