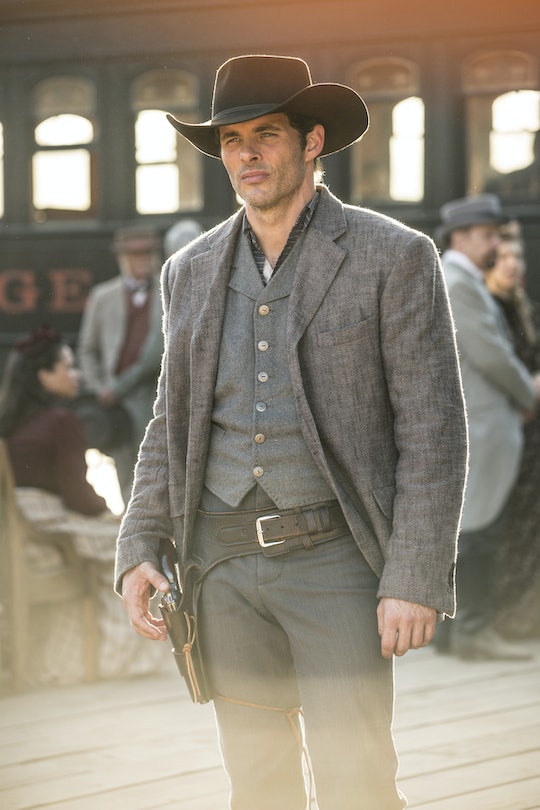 Is Teddy Real On 'Westworld'? Here's What We Know So Far

HBO has been a bit of a drama wasteland the last few seasons, with the exception of its anchoring hit Game of Thrones. Hoping to fill the void, intermittently satisfied by miniseries like last summer's The Night Of, is the J.J. Abrams-helmed sci-fi/western Westworld. The pilot was pretty successfully executed, but it set up a ton of questions for how things work in the world of a full-immersion theme park filled with incredibly lifelike, animatronic residents called "hosts." Two such residents were Dolores and Teddy, set up as the show's leading love interests. But is Teddy real on Westworld? The pilot was misleading.

He arrives in Westworld via train, which, we know, is how "newcomers," or people paying to enter the park come in. But it's definitely possible that some hosts are planted on the train to get newcomers acquainted. He seems to be regarded by the sex workers in the saloon as a newcomer, but, again, that could simply be a part of his programmed storyline. The biggest giveaway that Teddy is a host, and not a newcomer, however, is the fact that he was unable to kill the Man in Black with a gun, while the Man in Black swiftly shot and killed him. We know that hosts cannot harm newcomers — in other words, actual humans inside the park — by design, although the central conflict the show is driving toward seems to be a battle between how intelligent the hosts become versus their human makers' ability to control them.

Teddy's most significant relationship seems to be with Dolores, a farmer's daughter, and, as we come to learn, the oldest host in the park. They seem to be programmed into a storyline in which he begins every day making a triumphant return into town, blissfully reuniting with a head-over-heels Dolores. While it's possible that the hosts could be programmed to recall certain guests, even though they're reset every day, it seems unlikely that Teddy, were he a real person, would repeat the exact same introduction each time he reunited with Dolores.

Of course, this brings us back to the show's central conflict — Dolores is beginning to become self-aware and is seemingly doing an okay job of hiding that fact from the engineers. She also seems to be as in robo-love as robots can be, and so it's not unlikely that she will tell Teddy about her suspicions and try to take him with her on her journey to wherever she's going (escape? rebellion?). After all, that's how Dolores began to understand the truth: her father was programmed to protect her and so he felt compelled to tip her off when he began to understand what was really going on.

As for how "human" the hosts can really become and whether Teddy and Dolores will ever become a "real" couple, we'll have to stay tuned this season to find out.