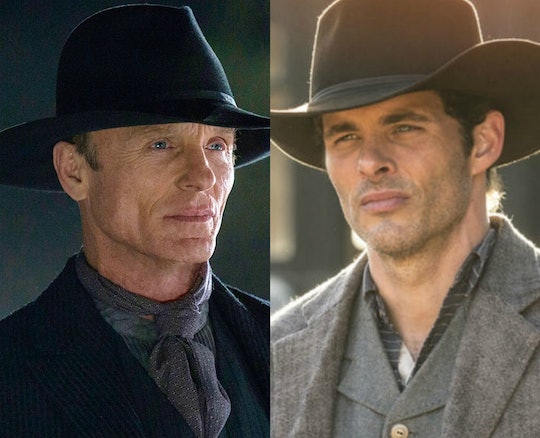 Is Teddy The Host Of William & The Man In Black On 'Westworld'? One Theory Links The Three

If there's anything that proves Westworld is the natural successor to Game of Thrones, it's the sheer number of fan theories it's been generating. Game of Thrones (and A Song of Ice and Fire, the series of novels on which it's based) has been around for far longer than the newer HBO series, but by all accounts the sci-fi western seems to be catching up to the longer-running fantasy epic in terms of fan speculation. One recent theory suggests something particularly intriguing about Dolores' robo-boyfriend – that Teddy is the host of the Man in Black (and William) on Westworld.

This seems like a pretty crazy/outlandish, theory right? Well, it actually makes a whole lot of sense – and gets even crazier – when you think it all through.

To understand this theory, it's important to back up and understand another, incredibly popular fan theory – that William, the naive and innocent white-hat guest we met during second episode "Chestnut," is actually the younger version of the Man in Black. This idea has gotten a huge amount of traction all over the Internet and is arguably the most popular unconfirmed theory in the Westworld fandom (so far, anyway).

It appears to have originated in the heavily-populated Westworld subreddit, courtesy of Redditor Where_isJessica_Hyde's comment on the forum's Season 1 Episode 2 discussion thread:

"Did anyone else wonder if Billy, the guy who was given the option to pick between the black hat and the white hat, was a younger version of the MIB? His scenes seemed to be set in the past, both the train journey and the subway station looking different when compared to scenes we've already seen. Perhaps something is going to happen, giving him 'whatever he wants' for the rest of his life, which would also turn him 'evil'."

This theory hinges on the (also unconfirmed) idea that Westworld actually takes place across a minimum of two separate time periods – one in its "present" (MiB's time) and one 30 years prior to that "present" (William's time). I know, I know – it's theories on top of theories on top of other theories. But all of these interconnected theories actually have pretty solid reasoning.

MiB mentioned, during the series pilot, that he'd been coming to the park for 30 years. He also clearly knew several of the hosts, including Dolores, Teddy, Kissy, and Lawrence – though, of course, none of them recognized him, as the robots are all programmed to regularly reset and not retain memories of prior Westworld guests.

Clues that there might be two distinct time periods include the fact that the Westworld logo is distinctly different (sorta retro) in William/Logan's scenes and in MiB's scenes and that Dolores' status as the park's oldest host makes it more than possible that the William/Logan scenes take place in the park's early years. The idea goes that ~something~ happened to William (something we're likely to see during these "flashback" sequences, if indeed that's what they are) that made him a VIP Westworld guest and also set him on the path to becoming the cruel, brutal man that the MiB is.

There are other interesting parallels between William and MiB – the most notable being that they each pick up Dolores rolling can while she's in town in the exact same manner. When MiB picks up the can in Episode 1, he distinctly looks as though he's done it many, many times before – perhaps, for the very first time, as William at the end of Episode 2. It definitely seems a familiar moment between Dolores and MiB.

Of course, there's also one more character who picks up Dolores' rolling can in the same exact way – Teddy.

Reddit user otto454z created a post introducing the idea that Teddy might have been programmed based on Williams's (aka, the younger MiB's) personality. They each repeat the same can-picking-up moment, but more generally, all three have a vested interest in Dolores.

That would explain the particular disdain that MiB seems to have for Teddy when he encounters him with Dolores on the Abernathy farm.

If Teddy was somehow and for some reason created to "replace" MiB's younger self in Dolores' eyes, MiB would definitely have reason to hate him. He also might hate him simply because he's a "living" reminder of MiB's younger, more innocent self. While they don't look at all alike, it's plausible that the Westworld employees simply imported William's personality into an "idealized" male form, hence the traditionally handsome James Marsden in the role.

It's important to keep in mind that all of this is still purely theory, and the speculation is just for fun. As of yet, the use of flashbacks, William-as-Man-in-Black, and Teddy as the robot version of William/Man in Black are all unconfirmed (albeit fairly likely) theories. But it certainly makes watching the show that much more fun, doesn't it? It's like piecing together a visually-impressive, totally-engrossing puzzle.