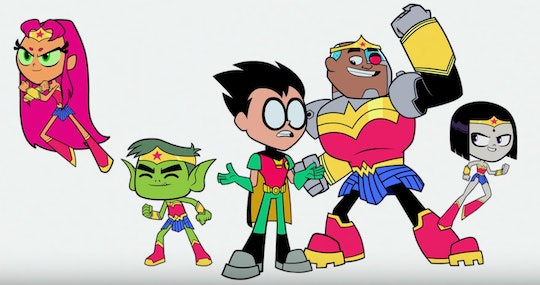 If Your Kid Wants To See The New 'Teen Titans' Movie, Here's What You Need To Know

There is something about animated movies that kids are just drawn to. It's hard to deny the impact that colors, animation, and some action has on kids, especially little ones. The Teen Titans Go! series on Cartoon Network definitely has this kind of impact on kids, and the first film of the franchise, Teen Titans Go! To The Movies, has definitely captured audience members, both young and old alike. But before parents take their kids to see this new movie, which is currently out in theaters, surely some parents might be wondering if Teen Titans Go! To The Movies is appropriate for children under the age of 5.

Teen Titans Go! is a series that brings a fun take on classic DC superheroes to a younger audience — allowing audience members to see what it's "like to be a Titan" when they're not battling evil, according to IGN. This is also the first movie for the crew, according to USA Today, which means that audience members are able to see the titans on the big screen together — and also means a lot more action and excitement than a normal 15-minute episode of Teen Titans Go! allows.

Because of this, some parents might be wondering if the full length film is too exciting for little kids. And according to Common Sense Media, a non-profit that breaks down films for parents, it might be more suited for those ages 8 and up, based on the jokes made in the film that older kids will be able to get.

Although Teen Titans Go! To The Movies is a fun animated feature, the film features "a lot of potty humor" and "frequent superhero action" which entails the animated characters using weapons like guns, missiles, and swords, according to Common Sense Media. These might not be things parents want to introduce to their young child just yet.

Additionally, the language used in the film is something to consider. Throughout the film, insults like "loser" and "stupid" can be heard, according to Common Sense Media.

Even the plot of the film might be a little too much for little kids to handle, according to Plugged In. The film is easy enough to get — it's a parody of typical super hero movies, according to NPR. But, the amount of meta jokes and "mega winks" made at recent live-action super hero films and "the film industry in general" might fly over the heads of little kids, according to Plugged In, therefore making the film suitable for almost all ages. And, according to CNN, kids in the test audience of the film seemed to "respond best" to the potty humor jokes — which means that the rest of the jokes definitely could fly over the heads of young audience members.

On the other hand, the film has gotten really good ratings, which might appeal to parents who are looking to bring their children to the movies. The film has gotten these ratings, according to Rotten Tomatoes, because it is a "charmingly light-hearted adventure" filled with "wacky humor." That sounds pretty appealing.

People on Twitter have given the film some glowing reviews as well.

It's obvious to state that parents know their kid best. If they think that their kid can handle a few toilet jokes without getting carried away outside of the film, that is their call to make. The film is rated PG (which stands for parental guidance) because of the "action and rude humor" in the film, according to IMDB.

With all this said, it seems there are definitely some things for parents to consider before they bring their young children to see Teen Titans Go! To The Movies.