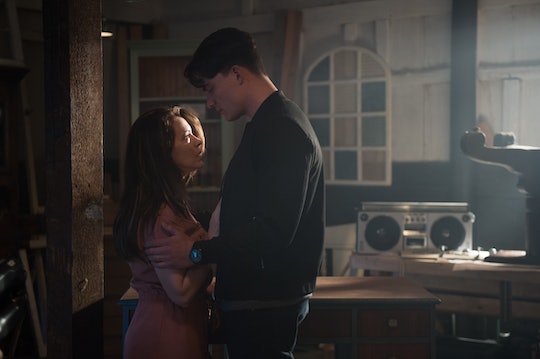 Lifetime's 'Tempting Fate' May Have You Running To The Bookstore

Get the wine ready. In Lifetime's new original movie Alyssa Milano stars as Gabby — a woman who has an affair with a business partner and becomes pregnant with his child. Now you're wondering if Tempting Fate is based on a true story.

Affairs happen, but this particular story isn't based on real-life events, I'm happy to report. It's based on the Jane Green novel of the same name. It premieres on the small screen on June 15 at 8 p.m. ET and is one of three Green novels that the network has adapted into a film as a part of its Book To Screen series this summer. The other two are To Have And To Hold starring Erika Christensen which will premiere June 22 and Family Pictures, which will bring Justina Machado to the network on June 29.

Lifetime movie fans often watch the network to be entertained by scandal. Tempting Fate will certainly deliver that. But Milano said on The Today Show she was drawn to the film because it has a raw element to it. "The beauty of it is she makes all these horrible decisions and you watch her life totally explode," she said. "We don't romanticize the idea of infidelity at all. You see what happens and then you see what happens when she tries to pick her life back up and how hard that is."

Milano is a mom on-screen in the movie as well as off screen, so Savannah Guthrie and Jenna Bush Hagar inevitably asked her about work-life balance. It's well-trodden ground for working women in Hollywood but this time it led to a refreshing conversation — because the ladies don't believe such a thing exists.

"I felt like I was inferior because I'm like 'oh, am I supposed to be balancing this?'" said Milano. "The thing that works for me because I'm constantly juggling a lot of things is just trying to be present, in the moment and focusing in that moment."

Of course, sometimes everyone needs help even when they are trying their absolute best in the present. There was a scene in the movie where Milano had to cry, and she just couldn't make it happen. "At one point I was totally tapped out, like the tears were gone and they hadn't even done my closeup yet."

Apparently, that's an actor's nightmare. But Tempting Fate director Kim Raver had the fix. "So she came over to me with her earbuds and she played Lady Gaga for me — 'A Million Reasons' and I bust into tears immediately and I was like 'well, that's a trick," said Milano.

I don't blame Milano for running out of tears, honestly. This affair has so many layers of consequences. There is a marriage on the line, a pregnancy to make decisions about, plus the children she already has that Gabby has hurt. It's really hard for me to see a path Gabby can take to pick up the pieces of her life. Thankfully, I don't have to know what it is, I can just watch the movie to find out.