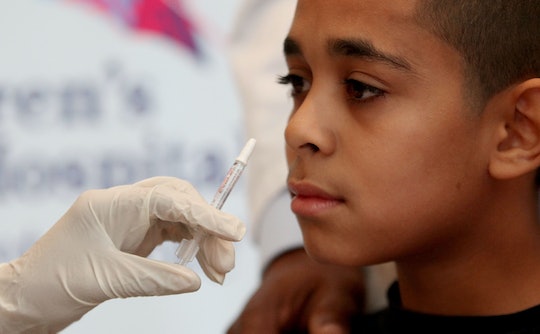 Is The 2018 Flu Season Almost Over? Don't Put Your Hand Sanitizer Away Just Yet

One of the worst flu seasons in recent memory affected so many people this past winter. But now that spring has arrived, it feels like the worst of this sickness should have passed. So is flu season almost over for most of the world, especially the United States? Predicting the spread of seasonal illnesses is tricky, but there's some cautiously good news to share.

On the whole, flu activity has declined in the United States, according to the Centers for Disease Control and Prevention (CDC). For many parts of the country, only local or regional activity has been reported in the past few days. "We have definitely peaked," said Kristen Nordlund, CDC spokesperson, to CNN in an interview earlier this month. "[But] that doesn't mean we aren't going to see more flu activity."

Even though this season is in decline, many people are still deeply affected by the flu every day. For the week of March 11 to 17, 2018, five pediatric deaths associated with influenza occurred, according to the CDC. The flu is still a dangerous possibility, especially for people in vulnerable populations. Very young children, the elderly, and those with compromised immune systems may need to continue taking extra precautions against the flu. It's a declining threat, but still a threat nonetheless.

For people who still haven't gotten a flu vaccine, it is not too late in the season to do so. "There's still time to get the flu shot," said Loyola Medicine primary care physician Dr. Barsanti-Sekhar. "The flu shot helps lessen symptoms and protects those around you as well." In fact, getting the shot now may be an especially good idea, because the exact duration of a single flu season is unpredictable. Sometimes flu activity continues as late as April or May, as noted in The Washington Post. If your part of the county is still experiencing flu activity, then getting the shot is your best bet.

If you've already gotten the flu shot this year, then there are still some basic hygiene practices you can use to keep yourself, as well as those around you, safe. The first step is keeping your hands clean. "The flu vaccine is the best way to prevent flu, but the next best thing is good hand hygiene," said Washington University School of Medicine infectious disease specialist Rachel Orscheln, MD, in WedMD. Washing your hands frequently, or using a hand sanitizer when needed, are excellent ways to lower your chances of infection from the flu.

In addition to hand washing, avoiding close contact with sick people, as well as trying not to touch your face throughout the day, are also good ideas, according to the CDC. That second tip is deceptively difficult. It's so easy to rub your eyes or rest your head on your hand during the day.

Lastly, it's smart to know the common signs and symptoms of the flu so you know when to get help. In general, getting the flu means you feel absolutely terrible, like you were just run over by a truck. Typical flu symptoms include extreme fatigue, body aches, fever, sore throat, and coughing, according to Healthline. Basically, it's like a common cold but several times worse.

And although the flu is not likely to cause severe symptoms in people who are generally healthy, it's smart to be on the lookout for those symptoms just in case. "“For most healthy people the illness is not life-threatening,” said Dr. Paul Biddinger, director of the Center for Disaster Medicine at Massachusetts General Hospital in The Cut. “But even if you’re young and healthy, you should watch out for severe symptoms such as confusion, difficulty breathing, or inability to keep hydrated.” If anything like that happens, then you should seek medical attention immediately.