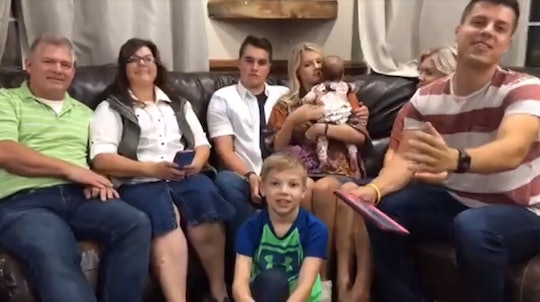 The 'Bringing Up Bates' Family Is Devoted To Their Faith

If you've watched a reality TV family over the years, such as the Bates family of UPTV’s Bringing Up Bates, you may think you know everything there is to know about them. But if you're just starting to follow the super-sized brood — Gil and Kelly Jo Bates have 19 children together — you may have some questions about their background. For example, is the Bates family religious? As it turns out, their faith is very important to them.

The Bates family is just as religious as the Duggars, who have also starred on various reality TV series on TLC. The members of the Bates family are evangelical, conservative Christians, according to ABC News, which plays into the size of their family. In fact, Gil Bates, family patriarch, told ABC News in 2011 that they didn't necessarily plan on having 19 children, but they don't believe in using birth control: "We both came to the conclusion that we just wanted to trust God with how many children we had. But we never thought we’d have 18 [now 19]. We thought maybe one or two, maybe three."

The Bates family is outspoken and proud of their religion. They pray together at meals and Gil pastors a church, according to Christian Today. On the family's website, they also let their faith take center stage, writing: "God said children are a blessing, and not wanting to miss out on any blessings, our family began to grow! Our precious children have taught us that money is not the only riches in life. In fact, money won’t last. Only two things in life will: people and God’s Word!"

They continue to say they are raising their children to be "soldiers for Christ and servants to all." The page is footnoted with a quote from British missionary C.T. Studd that reads: "Only one life will soon be past; only what’s done for Christ will last."

The family often talks about their faith on the show. For example, on a recent episode of Bates Family Live, their after-show live social media chat, the family asked for prayer for a medical issue sister Alyssa was facing. "Mom and Dad are in Florida with her and John, helping out. But do keep her in your prayers," the family said. "Keep the family in your prayers."

Part of the Bates' schooling and upbringing is apparently teaching their children to think for themselves. In February 2016, for instance, when sexual assault allegations arose against the leader of the Institute of Basic Life Principles, Erin Bates Paine wrote in response to a comment on her Instagram that she and her husband Chad don’t support the organization. "We are not affiliated with the ministry or Mr. Gothard in anyway at all, nor do we support. Thank you for your concern. May God richly bless you!" she wrote in 2016, according to SheKnows.

It’s clear that the Bates family is firmly committed to their religion and it's also evident that they’ve raised some seemingly healthy and happy kids, who are now starting families of their own.