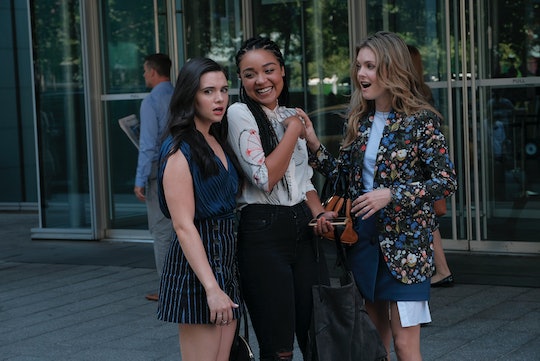 Everyone uses TV to escape lately, and it's more fun to watch with friends. Yours might be bugging you to watch The Bold Type — the Freeform series that follows Jane, Sutton, and Kat (Katie Stevens, Meghann Fahy and Aisha Dee) on their adventures at Scarlet, the fictional magazine where they work. The ladies tackle tough issues in the journalism world and their personal lives together. It's the perfect show to watch on girls night in. So, is The Bold Type on Netflix?

Unfortunately, you can't watch the ladies of Scarlet kick ass and take names on Netflix. But there's good news! The entire series is actually available to stream right now on Hulu. And believe me, if you haven't seen this show yet you're going to want to give it a chance. One of my favorite hobbies is convincing people to watch The Bold Type. It's fun and indulgent and watching it feels like self-care with a side of social justice.

It appears that shows only appear on Netflix once the season has already wrapped up. Hulu, however, often features shows currently airing. That means you don't need to wait to catch up on Season 3 if you get totally hooked.

If there's a particular friend you love but haven't been seeing eye-to-eye with, call her up and stream the series with a bottle of rosé between you. Part of the reason I love this show is that it doesn't shy away from important topics — and the main characters don't always agree with each other though they always find common ground.

Kat, Jane, and Sutton have had plenty of fights about sensitive topics like gun control and race privilege and they are real with each other about their partners. But talking about it all has made the girls' relationships stronger. So watching this show with your own besties will be like therapy — but fun, I promise.

One particular topic that I thought was going to be a "break it" moment for Jane and Sutton's relationship was a Season 2 episode in which Jane discovers Sutton is a gun owner. “[Gun control] is such a controversial topic and I think we really wanted to focus on was how can you have a difficult conversation with somebody that you love whose opinion you disagree with,” Fahy told Teen Vogue about the episode. Spoiler alert — they're still roommates, the gun is now jewelry, and all is well. So, you know, you and your roommate can survive difficult conversations like that, too. Sometimes they're just necessary.

Though the cast knows the social issues ground the show, so does the fashion closet, where the three main characters gather to discuss their personal lives and fashion emergencies. Fahy, Stevens, and Dee lean on each other just as their characters do, especially while dealing with the fame that comes with being on a popular show. "The experience of the show’s so exciting, but it can be such a whirlwind," Fahy said during an interview with MTV. Looking to her castmates she continued, "It’s nice to just look at your face or your face and be like, ‘Oh, we’re just doing stupid stuff together.'"

Dee echoed that sentiment, and spoke about the importance of seeing women support women in the media. "We’re taught through movies and media a lot of the time to look for your Prince Charming ... but really, your friends are the ones who stick with you through all of it."

Basically, The Bold Type is about female empowerment and we all need more of that in our lives. So what are you waiting for? Get your dose of women supporting women on Hulu right now.