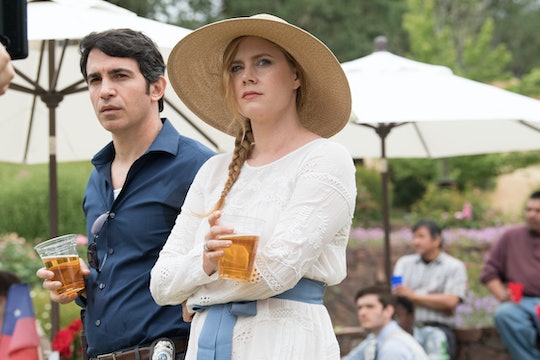 Every episode of Sharp Objects has shared a tidbit or two about the history of the town in which it's set. The streets of Wind Gap, Missouri are plastered with retro ads and graffiti that indicate how much the past and present co-exist there. Local legends have become interwoven with the recent murders, with the Woman in White painted as a suspect. "Ripe" shared another side of the town by introducing a regional holiday. But is the Calhoun Day story real on Sharp Objects?

The story got the high school drama club treatment when Amma and her friends performed it in preparation for the Calhoun Day celebration. But she altered the tale to suit her own interpretation of events. Calhoun Day exists to honor a Confederate "hero" named Zeke Calhoun for reasons that aren't stated outright in the first few episodes. According to The Atlantic, he founded Wind Gap. In Amma's skit, she reimagined what happened: instead of Zeke getting all the glory, Amma depicted him teaching his wife to shoot so that she could form an all-female Wind Gap militia. "My mama says all history is written by men, so of course they're gonna make themselves look good," she said when her teacher objected.

Amma's version of the Calhoun Day story is untrue even in the world of the show. Though the trailer for Episode 5 featured hints of the real story playing out, it hasn't been shared yet on screen. And there's no help from the book the show is based on, because Calhoun Day doesn't come up in Gillian Flynn's Sharp Objects.

A teaser for "Calhoun Day" shows the lawn outside the Crellin house decorated with cannons. Several characters don Civil War uniforms. Amma's play seems to involve a woman being tied to a tree and burned alive by soldiers. The real story of Calhoun Day is still unfolding, though it's unclear how exactly Zeke Calhoun became a hero if people were being set on fire in his vicinity. And technically no story about Calhoun Day is real, because Calhoun Day isn't actually a thing.

Wind Gap is a made-up Missouri town that Flynn came up with specifically for her novel. In an interview for HBO, she called Wind Gap "largely imaginary" and said that it wasn't based on any particular real place. It was created to explain the kind of atmosphere Camille had been raised in. "I knew I wanted [Wind Gap] to be a town of violence that Camille grew up in," Flynn said.

If Wind Gap isn't real, then none of its local history is either. The Woman in White is fictional on two levels: on top of being something of a bogeyman, she was invented by Flynn. Zeke Calhoun was not a real man and there's no evidence that any Southern city, in Missouri or elsewhere, devotes a day entirely to him.

Every detail of Wind Gap's history might not correspond to something out in the real world, but they do help to make the town feel real anyway. They flesh out the world of the show even further, giving Wind Gap texture and context. It also explains the circumstances Camille was raised in and the conflicting values of the townspeople. They celebrate violence every year during the Calhoun Day festival but refuse to admit that any darkness might lurk among them; instead they want to pin the murders of Ann Nash and Natalie Keene on a mysterious outsider.

Wind Gap isn't a real place and its past is pure fiction, but all of it conspires to better explain who these characters are and how they came to be.