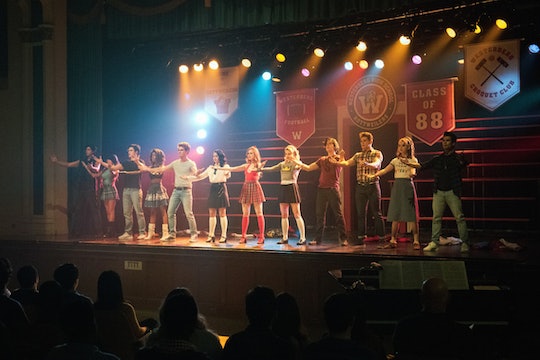 After seeing Archie and the gang sing their hearts out in Carrie: The Musical last season, Riverdale fans are excited to see their favorites hit the stage again. In Episode 16, titled “Big Fun,” the students are tackling another deadly musical production. Each song from the episode sounds amazing, so fans are wondering if the cast of Riverdale is really singing in Heathers: The Musical or not.

Just like they did last year, the cast of Riverdale will be singing for their production of Heathers. According to E!, when showrunner Roberto Aguirre-Sacasa talked about the episode earlier this year, he revealed that the whole cast would be lending their voices this time around. "Last year, we had a blast doing Carrie,” he said in a statement. “This year, we wanted to honor another iconic teen movie. Heathers: The Musical is ‘BIG FUN’, with great roles for the Riverdale kids, and everyone is singing."

In an interview with TV Guide, the cast revealed a few details about the episode, including how they took to the recording studio to prepare in advance. “You know the dance rehearsals and the pre-records, you know there’s a lot of choreography to be done, but it’s been fun,” said Casey Scott (Kevin). “We know the workload,” added Madelaine Petsch (Cheryl). “So we can enjoy it so much more knowing we have to go to the the studio three or four times, but we know how many songs we have. They give us more time with it, so it’s all about the prep time that allows us to enjoy it more.”

For fans who felt jipped when Jughead (Cole Sprouse) was left out of the Carrie musical, there’s some good news. K.J. Apa (Archie) and Charles Melton (Reggie) told TV Guide that Jughead is in the musical this time around, and they’re excited that fans will finally get to hear Sprouse sing. "I'm excited for them to see Cole sing, for sure," said Apa, with Melton adding, "I think we're all excited that he's finally gonna be a part of the musical."

With so much happening on Riverdale — from gang warfare to serial killers and everything in between — a musical episode is a perfect addition to this season’s wild ride. Apa told TV Guide that Heathers: The Musical is an exciting, “upgraded version of last season’s musical,” with Sprouse adding that the episode is right on par with everything already happening this season. "Honestly, at this point, Riverdale is whatever it is week to week," said Sprouse. "So it [the musical episode] seems pretty right on target for the narrative of our show."

Knowing Riverdale, I’m sure some deadly situation will arise during the production. Last season, during Carrie: The Musical, Midge was killed and pinned to the stage backdrop by the Black Hood. This season, the threat of the Gargoyle King and the Farm cult are still lingering, and knowing that the Farm is sponsoring the show, you know something shady will go down. Hopefully, this time around, everyone will make it out of the auditorium alive.