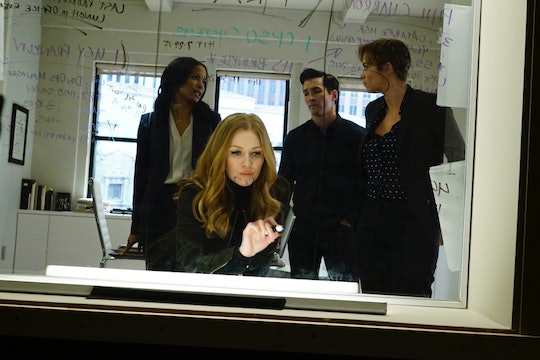 Is 'The Catch' Based On A True Story? People Have Been Conned Before

If the phrase "Shondaland" means anything to you, then there's a good chance you're looking forward to Thursday's new ABC show, The Catch. Mireille Enos and Peter Krause join the TGIT lineup in an exhilarating cat-and-mouse game between jilted exes. If you're so compelled by the show's premise then you might be wondering if The Catch is based on a true story, or if it is just a concept brought to life by creator Jennifer Schuur. Was the show inspired by a real-life fraud investigator who got conned by her fiancé? Or is this just an amazing fictional addition to an already stacked lineup on Thursday night?

It appears that The Catch was originally developed under the much more British-sounding title The Long Game. This seems highly appropriate considering that the show was based on a treatment penned by award-winning British author Kate Atkinson. According to Deadline, Atkinson is best known for writing detective novels, namely her best-selling Jackson Brodie series. There's no evidence that the relationship between The Catch's main characters is inspired by either of the author's marriages, which is probably a good thing considering this is a Thursday night ABC drama we're talking about, and things tend to get really messy on TGIT shows.

The show's premise might sound fantastical, but people get conned out of large sums of money all the time. Five people were recently arrested in England after conning their victims out of thousands of pounds. A con artist in Texas was recently sentenced to six years in federal prison after scamming victims for more than half a million dollars. An op-ed published by The New York Times recounted the real-life story of a woman who discovered that her live-in boyfriend completely fabricated his identity.

The New York Times piece mentions a phenomenon described by psychologists as "Pinnocchio circling," where "the more engrossed a reader was in the story, the fewer false notes she noticed." In other words, the closer a con artist gets to the victim, the less likely that victim is to notice any telltale red-flags. This phenomenon makes The Catch's premise of a savvy fraud investigator being conned by her own fiancé all the more believable. So, it's plausible that even a woman with the cunning skills of Mireille Enos' character could fall victim to the charms of a con artist — especially one with the charm of Peter Krause.