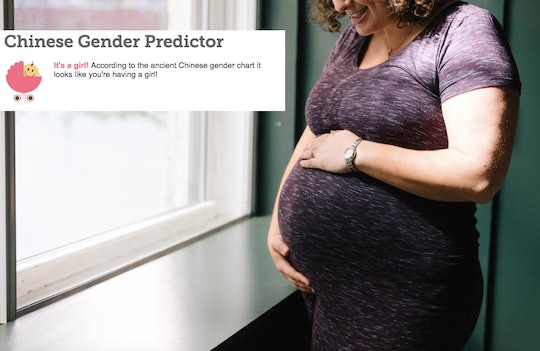 People Are Using This Chinese Test To Predict Their Baby's Sex, But Does It Work?

When you are pregnant, or trying to get pregnant, it's hard to not think about the baby you're having. What will they be like, what will they look like, and of course, the question you're most asked — is it a boy or a girl? There are plenty of old wives' tales when it comes to sex prediction, but really, there's no method that's 100 percent accurate other than actually meeting your baby at birth. Some people swear by things like the Chinese Gender Predictor Test, but is the Chinese Gender Predictor Test accurate?

According to Parents, the Chinese Gender Predictor Test was discovered over 700 years ago and uses a mother's lunar age and month of conception to predict whether their baby will be a boy or girl. As noted by Huffington Post, the test is said to have been used by Chinese royalty in order to ensure enough heirs to the royal bloodline and that the test still exists in Bejing's Institute of Science. Various Chinese calendar websites note that the accuracy rate for the Chinese Gender Predictor Test can range anywhere from 85 to 93 percent, but a study out of the University of Michigan claims it only has a 50 percent accuracy rate.

The University of Michigan noted that while analyzing data regarding the validity of the Chinese Gender Prediction Test, they attempted to find a correlation between the chart and the results of about 2.8 million births. There wasn't any. It's about as accurate as flipping a coin, noted lead researcher, Dr. Eduardo Villamor.

Interestingly enough, when I attempted the Chinese Gender Predictor Test on my own kids' births, it was accurate on both counts. When I input my age at conception and month of conception for my boys' birth dates, the test showed that I had a boy each time. Obviously, this is likely a stroke of pure coincidence, but still fun to note.

There are many different old wives' tales when it comes to at-home sex prediction, and if nothing else, they can be fun to experiment with while you wait for your little one to arrive (as long as you don't take the results too seriously). A lot of parents-to-be love to try multiple methods of prediction and weigh the results against one another to try to guess the sex of their babies.

Some of these prediction tests are based on how mom is feeling, how she is carrying her pregnancy, what she's craving, what her skin is like or, interestingly enough, how her urine interacts with things like the juice of a red cabbage or Drano (to each their own, right?), reported Babble. According to Parenting, there is also a legend that suggests that baby's in utero heartbeat can even predict gender (140+ beats per minute indicates a girl, and below 140, a boy).

And, of course, your friends and family will always have their own opinions on whether you are having a boy or a girl. Some couples even start a betting pool with their friends to keep things light and fun while waiting for baby. With the continuing popularity of gender reveals, it can be a fun way to get everyone excited for the big news.

Recently, actual sex-prediction tests (usually urine or blood-based) have been appearing on drugstore shelves. Most experts or healthcare providers advise against putting much weight on results from these though. According to Parents, the urine-based ones are particularly scammy, because there are no detectable sex hormones in pregnant women's urine at that point. And, though doctor-provided blood tests can predict gender as early as seven weeks pregnant, the quality, and therefore accuracy, of home-based blood tests to predict gender is subpar.

Obviously any given at-home gender prediction "test" can only really have a 50 percent rate of success, and that is only because there is a 50/50 chance that your baby will be either a boy or a girl. There have been countless tales of friends of friends whose baby turned out to be the opposite of what was planned for, so really, nature's got this one on us. Save for a doctor-approved blood test or ultrasound — everything else is just a guess.