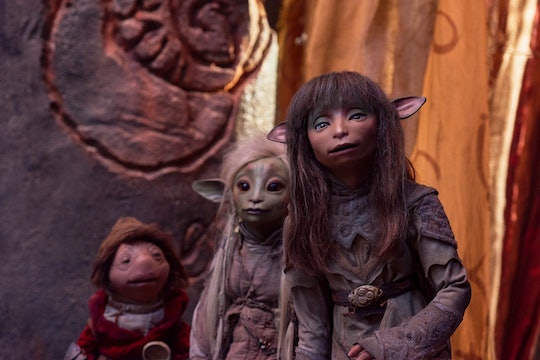 'The Dark Crystal: Age Of Resistance' Might Be Scary For Little Ones

After nearly four decades, fans of Jim Henson’s 1982 animatronic adventure, The Dark Crystal, are going back to Thra with Netflix’s prequel, Age of Resistance. Like the original film, the new series tells its story through masterful puppetry, and takes place in a dying ancient world filled with magic and mythical creatures. The show features some intense moments, so if you have little ones at home, you may be wondering if The Dark Crystal: Age of Resistance is appropriate for kids under 10.

Unlike the Henson classics you might be used to — like The Muppet Movie or Sesame Street — Dark Crystal: Age of Resistance is more of a fantasy series. It has a Lord of the Rings type feel, with both good and evil characters, all fighting to gain control of their dying world. The series doesn’t have a specific rating, but Common Sense Media deemed the original movie appropriate for kids aged 7 and up, so parents with very young children may have to screen the series beforehand to gauge how their kids might react to it.

In an interview with Collider, Taron Egerton — who voices the Gelfling castle guard Rian in Dark Crystal: Age of Resistance — said the series is in the spirit of the 1982 film, and it’s very similar in tone. “It has a thread of darkness that runs through it,” Egerton explained. “It’s totally appropriate for children, but there is something challenging about it. There’s something that feels a little bit dangerous and dark about it. And so, it’s both satisfying for kids and grown-ups I think, and the series is absolutely in the spirit of that.”

For those who aren’t familiar with the world of The Dark Crystal, it tells the story of a planet called Thra. The desolate planet is ruled by the Skesis, a race of evil beings who use the power of the dark crystal to rule. The Geflings, a kind and brave race of elf-like beings, fights against the Skeksis, and tries to harness the power of the crystal to save their world.

As a prequel, the new Netflix series takes place before the events of the original movie. It follows three Gelflings — Rian (Taron Egerton), Brea (Anya Taylor-Joy), and Deet (Nathalie Emmanuel) — who discover the Skeksis’ secret source of power and set out on an epic quest to start a rebellion and save their world.

The puppets in the series aren’t cute and cuddly like the Muppets, and their aesthetic might be intimidating for really young children. The Skeksis characters are bird-like creatures with teeth, and act as daunting and evil as they look. The Skeksis cause real pain and destruction for the Gelflings and Thra, and these themes of darkness could be too much to handle for young, sensitive children. If anything, the series could be frightening for little ones, so it’s a good idea to watch through the series before letting them tune in.

The Dark Crystal: Age of Resistance is now streaming on Netflix.