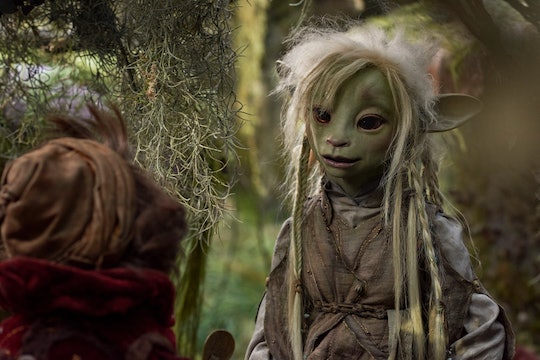 'The Dark Crystal' May Be Too Intense For Your Little One

You can now revisit the fantasy world of Jim Henson’s 1982 film, The Dark Crystal with Netflix’s new prequel series, Age of Resistance. Though the magic of puppetry, the show tells a mythical tale of brave elf-like people who fight to save their planet from an evil alien race. The series isn’t your regular Muppet fare, so if you are watching with the family, you may be wondering if The Dark Crystal is appropriate for little kids.

Netflix gave the series a PG rating, which suggests young children should have parental guidance when watching. According to the Motion Picture Association of America, the PG rating indicates the content may include “some material parents might not like for their young children.” The series is similar in theme and tone to the original 1982 film, which Common Sense Media deemed appropriate for kids aged 7 and up. As a parent of a little one, you might want to screen a few episodes beforehand, so you can gauge how your kids might react.

After seeing the Henson name attached to series, you may have assumed the series is similar to one of his classics like The Muppet Movie or Sesame Street. But you should know that The Dark Crystal: Age of Resistance is a dark fantasy series — similar in tone to the Lord of the Rings — and it features both good and evil characters, and the intense premise that they are all fighting to gain control of their dying world.

The story is centered around three Gelflings — Rian (Taron Egerton), Brea (Anya Taylor-Joy), and Deet (Nathalie Emmanuel) — who live with their people on a planet called Thra. These kind, elf-like creatures find themselves in desolate conditions when their world is overtaken by an evil alien species called the Skeksis. The Gelfings discover that the Skeksis are using the power of a magical dark crystal to rule Thra, and as they set out on a mission to retrieve the crystal and save their planet, they incite a rebellion against the Skeksis.

In an interview with Collider, actor Taron Egerton — who lends his voice as the hero Gelfling Rian — noted that the series is very much in the spirit of the original film. “It has a thread of darkness that runs through it,” Egerton explained. “It’s totally appropriate for children, but there is something challenging about it. There’s something that feels a little bit dangerous and dark about it. And so, it’s both satisfying for kids and grown-ups I think, and the series is absolutely in the spirit of that.”

The series features themes like war, rebellion, danger and injustice, which could be confusing for very small children. And the puppets on the show aren’t exactly cute and cuddly. While the Gelflings are elf-eared, somber looking creatures, the Skeksis have long beaks, pointy teeth, and creepy voices, which make them daunting and scary. In scenes where evil or danger is present, intense music and sound effects reflect the scene, which combined with the dark premise and characters, could be frightening for sensitive kids.

Every child is different, so ultimately, as a parent, you’ll need to make a decision based on your specific situation. The best bet is to jog through the show ahead of time, so you can determine whether or not it’s appropriate for your little one.

The Dark Crystal: Age of Resistance is currently streaming on Netflix.