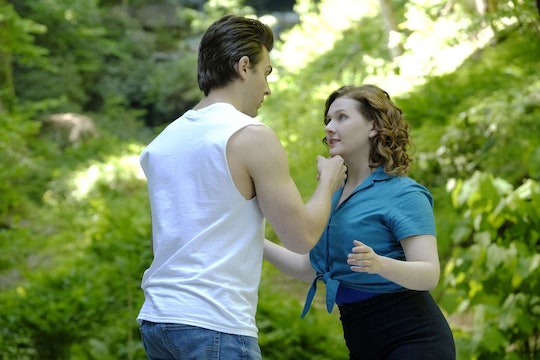 The 'Dirty Dancing' Remake Will Showcase The Cast's Vocals

The latest in Hollywood's ever-growing collection of remakes is ABC's Dirty Dancing three-hour television event. The new version is a reimagining of the 1987 original (starring Jennifer Grey and Patrick Swayze in the lead roles), with one major difference — ABC's take on the classic is a musical. This makes the Dirty Dancing remake unique among the other TV musicals that have been released in recent years, like last year's The Rocky Horror Picture Show: Let's Do the Time Warp Again (which, of course, already had songs from the original). But is the Dirty Dancing cast really singing in the remake?

While the original featured plenty of music from the story's 1960s setting and the film's 1980s release, it wasn't incorporated into the actual movie and sung by the cast. Songs like "Be My Baby," "Hungry Eyes," "Big Girls Don't Cry," and of course the iconic "(I've Had) The Time of My Life" are all memorable tunes from the '80s romantic drama dance movie. The upcoming remake, set to debut on ABC on Wednesday, May 24, features songs showcased in the original movie's soundtrack now covered by a mix of the actors appearing in the remake and recording artists not appearing in the remake.

For example, Karmin's cover of "Big Girls Don't Cry" appears on the Dirty Dancing: Original Television Soundtrack (which was made available on May 19), as does Lady Antebellum's version of "Hey Baby" and Seal's "Cry To Me." (Obviously, none of those three appear onscreen in the actual remake.)

The entire ensemble cast performs a group version of what's arguably the most well-known song from the film, performing "(I've Had) The Time of My Life" in the big, climactic group dance scene near the end of the movie.

What seems the most intriguing about the remake is the fact that it's expanded roles and fleshed out motivations for some of the characters featured less prominently in the original, according to the cast. Debra Messing, who plays Baby's mom Marjorie Houseman, explained that because the musical version is "a little longer," there's more time to devote to these side characters. "[Y]ou learn a lot more about Baby's mom and Baby's dad, and those dynamics," Messing told ABC News. "And you also find out what happens to Baby and Johnny after the original movie ends [after the summer at the Catskills resort]."

That explains why Messing, whose character wasn't a huge or very important part of the original, gets a solo of her own, singing "They Can't Take That Away" (later reprised by Bruce Greenwood, who plays her husband Dr. Jake Houseman).

One thing is for sure: This version of Dirty Dancing will certainly be unique and distinct from the original (for better or worse).