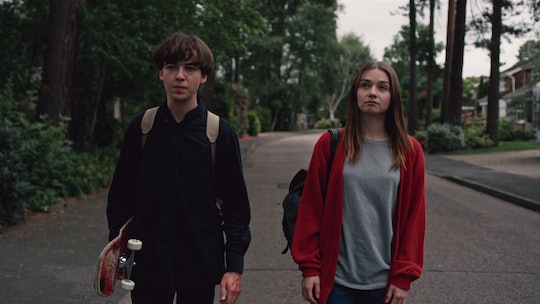 It's Time To Watch Your First Netflix Obsession Of 2018

The End of the F***ing World is the newest Netflix addition, and it's a dark comedy with an interesting concept: a young man who thinks he can't feel anything decides to prove it by killing someone. His intended victim ends up becoming his friend, and they embark on a road trip together. It sounds like fiction, but is The End of the F***ing World based on a true story? The world is full of bizarre occurrences, after all, so you never know what might be true or not.

In this case, however, there's no true story that serves as the inspiration for the television series. Instead, it's based on a comic of the same name by Charles S. Forsman. Forsman alternates between the perspectives of his protagonists James and Alyssa over the course of the graphic novel, with James' sociopathy leading to increasing violence and Alyssa forcefully unaware because of her own issues and affection for him.

While there doesn't seem to be any evidence that Forsman took inspiration from a true story, some Goodreads users noticed similarities between The End of the F***ing World and several movies that were based on true stories, such as Bonnie and Clyde and Badlands. The basic idea of a criminal couple on a journey together does have some real life examples.

The 1967 film Bonnie and Clyde starred Warren Beatty and Faye Dunaway as real life bank robbers Clyde Barrow and Bonnie Parker. Barrow and Parker went on a crime spree during the Depression that included murder and robbery; they were both eventually killed in a shootout with the police. Over time, they were adopted by pop culture, glamorized and immortalized on film. They became an archetype, and any sexy-yet-villainous couple in media will likely draw comparisons to them at some point. It's easy to see how their cross-country criminal activities and complicated (but intriguing) relationship could draw comparisons to The End of the F***ing World.

But the 1973 Terrence Malick film Badlands, which starred Martin Sheen and Sissy Spacek, might be the better parallel. Forsman did mention enjoying the film in an interview with Comics Alliance, though he also made it clear that he did not set out to create something inspired by it. Badlands was one of many films (others include Kalifornia and Natural Born Killers) that told a fictionalized version of the story of Charles Starkweather and Caril Ann Fugate.

Starkweather was a teenager when he went on a two-month killing spree, accompanied by his younger girlfriend Fugate. His first murder was of a gas station attendant named Robert Colvert. He then killed Fugate's mother, stepfather, and toddler sister. He and Fugate remained in the house with the bodies until fear of discovery led them to flee. Starkweather killed at least seven more people as they continued to move from place to place. He was caught and later executed; Fugate served jail time as well, though the extent of her involvement in the murders is disputed.

There is definitely precedent for the kind of relationship that develops between James and Alyssa in The End of the F***ing World, but most of it is so embedded in our cultural consciousness already that it's difficult to point to one specific source. Forsman instead has cited numerous other inspirations: a desire to play with format, his own trauma as a young man following the death of his father, and even the TV show Dexter.

There may be something familiar about the patterns and characters of The End of the F***ing World because of other stories you've seen or heard, but at the end of the day it is entirely a fictional creation.