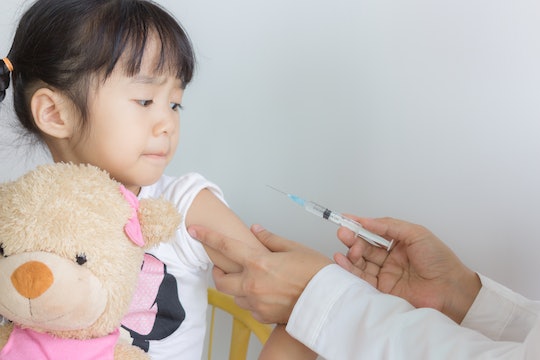 The cries of pain that follow when babies get their shots are enough to break your heart. While the momentary pain is certainly worth the protection that vaccines provide, it's no fun for anyone involved. This may be why the nasal flu immunization seems so desirable. But is the flu shot actually more effective than the nasal spray? A new study suggests that it is, especially when it comes to protecting children.

Most U.S. physicians offer two options for vaccinating against the flu: the traditional shot and a nasal spray called FluMist. According to Washington's Top News, FluMist is a live attenuated — or weakened — influenza vaccine, and the traditional shot is not live. The theory behind the nasal spray is that it strengthens the immune system and provides protection against the flu, without the pain of a traditional vaccine. All the protection with none of the pain; the perfect combination for kids, right? Well, in theory.

For the last two years, the CDC's Advisory Committee on Immunization Practices — a panel of immunization experts — did not include FluMist on its list of recommendations, according to CNN. And while it was included on the list this year, a recent study found that the nasal spray is not as effective as the traditional shot, particularly when it comes to children.

The study, published in the journal Pediatrics, analyzed data from several previous studies on past flu seasons and determined that the nasal spray was not protecting children as thoroughly as the shot. Researchers determined that the shot was about 67 percent effective, while the nasal spray came in at around 20 percent. It is worth noting that this year's data was not included in the study.

This is not exactly a groundbreaking finding, as the American Academy of Pediatrics has been advising parents since September to avoid FluMist unless they have no other choice, according to Stat News. Unless a parent refuses to vaccinate with a needle, or if a doctor runs out of flu shots, the AAP recommends going the poke and jab route. Dr. Henry Bernstein, a pediatrician and an ex-officio member of the AAP’s committee on infectious diseases, told Stat News, “The AAP feels that the flu shot should be the primary vaccine choice for all children.”

But while the study's findings are not brand new, they are important. Jessie Chung, lead author of the study and an epidemiologist in the CDC's Influenza Division, told CNN as much. "We were able to better describe vaccine effectiveness in age groups that the individual studies were not able to due to small sample sizes," she said. And considering that the CDC lists children as some of the most vulnerable to the flu, knowing the specifics for their age group is paramount.

The CDC reported on Friday that there have been 13 reported pediatric deaths due to the flu this season. Additionally, 8 out of every 10 deaths involved people who were not vaccinated. However, the exact number of deceased children who were unvaccinated is not clear. And while those numbers are rather frightening for parents, there is some good news.

According to Forbes, this year's flu vaccine is highly effective. The 2019 flu season involves four strains of influenza: H1N1, H3N2 and two strains of Influenza B. Specifically, about 90 percent of CDC tested cases are H1N1 and the other 10 percent is made up of the other three strains. This year's vaccine contains all four necessary strains, something that Forbes reported is a bit rare, meaning that those who are vaccinated will be well covered.

My husband and I took our 7-month-old in to get her booster flu shot last week — as the CDC recommends that babies get a second, booster flu shot after their first year of immunizations. As always, I dreaded the look of pain and betrayal that flicks across her face every time a nurse pricks those chunky baby thighs of hers. The idea of sparing her that bit of pain with a simple squirt up her nose sounds really appealing. But ultimately, the effectiveness of the shot is worth the momentary discomfort. It's a lot easier to care for a crying baby after a shot than it is to care for one with the flu. So, bring on the needles.