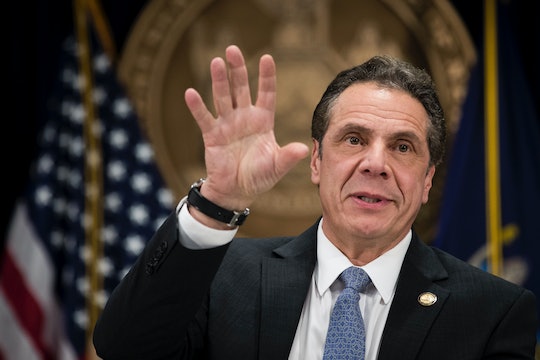 Is The Future Of Public College Tuition-Free?

On Sunday, lawmakers in New York voted to make the state the first in the United States to offer a free college education to students from low- and middle-income families. For Gov. Andrew Cuomo, who has long championed the plan, it's an important step in ensuring that young people secure careers and achieve success. If he's right, does that mean that the future of college is tuition-free?

The program in New York will ultimately apply to students whose families earn $125,000 or less annually and who opt to attend a public institution in the state. Projected by the governor's office to cost taxpayers an additional $163 million in its first year, it will cover tuition only, not room and board, and the scholarships will revert to student loans if the student does not live and work in the state for an agreed-upon period of time post-graduation. Students who benefit from the aid must meet minimum course load and GPA requirements.

The goal, of course, is to make college accessible for students of all income levels working to launch their careers and lives. It's no secret, in the midst of this student loan debt crisis, that paying for school is a major burden for many that can make getting a secondary education the opposite of the equalizing force it's meant to be.

The issue was front and center of the national conversation during the presidential campaign season. At the time, primary candidate and Vermont Sen. Bernie Sanders was especially dedicated to making college debt-free by using tactics like prohibiting the government from profiting off student loans, dramatically slashing loan interest rates, and, yes, eliminating tuition altogether. And since losing the Democratic nomination, the senator from Vermont has worked to keep the issue in the public consciousness: In April, he and Democratic colleagues unveiled proposed legislation that would "make public colleges and universities tuition-free to students with family income up to $125,000; make community colleges tuition-free; cut student loan interest rates in half; and triple funding for the Federal Work-Study program," according to Inside Higher Ed.

Sanders' tuition-free plan for all American families making up to $125,000 annually who send students to public institutions, of course, mirrors the legislation that just passed in New York. But not everyone there is happy about it. Republican lawmakers in New York, for example, have worried that the plan excluded private colleges and suggested expanding the state's existing grant program to cover low-income residents at any accredited New York postsecondary institution, CNN reported. (Cuomo's final legislation did end up including a $19 million new tuition award program for private college students.)

Writing for The Hill, though, contributor Diana Carew argued that the conversation about "free" college must shift from talking about cost to outcomes. After all, she wrote, there is no such thing as a truly free education — the onus to pay simply moves from the students and their families to taxpayers. Instead, changemakers should talk about the "future of education," which would mean incentivizing colleges and universities to innovate and evolve to prepare students to actually succeed in the labor market. This could include bringing back apprenticeships, harnessing the "broadband revolution" for customized learning, and putting career counseling at the center of the college experience.

"In this future of college, degree creep — where jobs that don't need advanced degrees increasingly require them — would become a relic of an outdated system, as would the delineation between a floundering community-college system and four-year universities," Carew wrote. "Students would get only the credentialing they need, and schools would actively seek out the most cost-effective ways to provide it."

Regardless of how this debate evolves, it's clear that lawmakers are thinking about ways to usher American students into colleges and universities. And all eyes will undoubtedly be on New York, tracking its success or failure, in order to determine the best ways for the country as a whole to move forward.