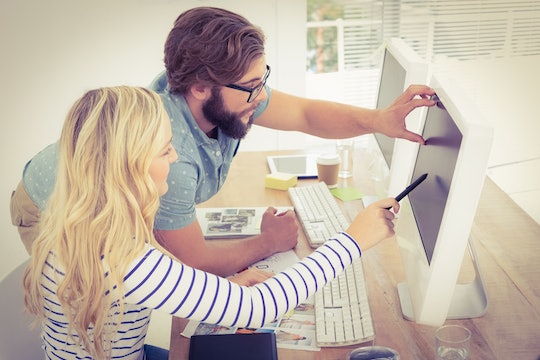 Is The Gender Pay Gap Real? Yes, But One CEO Took The Biggest Possible Step Towards Eliminating It

Tech can be a particularly troublesome area when it comes to gender equality and the wage gap, but one major company just took a huge step forward when it comes to getting rid of it. On Tuesday, it was announced that Salesforce put $3 million towards ensuring equal pay between all male and female employees, by analyzing salaries company-wide, and literally filling in the gaps wherever they appeared.

"Equal pay for women is critical," CEO Marc Benioff said during the Fortune Global Forum this week when speaking about Salesforce's values. "We've looked at every single one of our female employees' salaries and we've adjusted it against all of our male employees' salaries ... We can say that we pay women the same as we pay men."

Salesforce has also committed to increasing the number of female employees at their executive management meetings, and promotions of female employees increased by 8 percent from the year before to 32 percent. While $3 million won't exactly change the wage gap overnight, it's uplifting news after a recent report by PayScale revealed that on average, female employees make a whopping 25 percent less than their male counterparts. Some pretty depressing government data has been telling us for a while that American women earn 78 cents for every dollar a man makes, but PayScale's recent review — which compared the salaries of over 1.4 million users logging their wage — put the number at 74 cents. When controlling for factors such as college majors, years of experience, or type of job, the gap decreases — but still exists. If you compare a man and woman with the exact same type of job, same time in the work force, and same degree, the female employee will still make 3 cents less for every dollar the male employee makes.

And that's just unacceptable. So I tip my hat to Salesforce and Benioff for taking the lead in the tech field, which is particularly notorious for its sexism — and urge other companies in all fields to follow their lead. Let's get hustling.