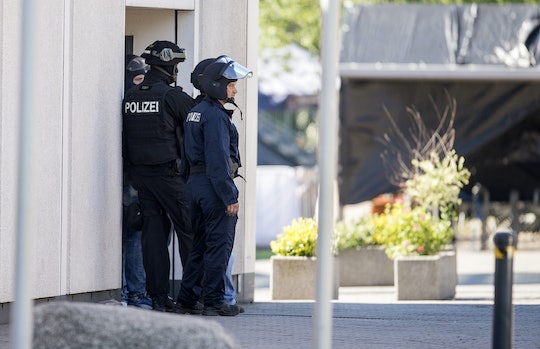 Is The German Movie Theater Shooting Terrorism? The Scale Of The Crime Is Horrifying

A masked shooter was killed today inside a movie theater near Frankfurt Germany, according to Haaretz, leaving people to wonder about the motives behind the attack. Is the German movie theater shooting terrorism or related to extremism? It's not exactly clear, but so far authorities have said there likely is no connection.

The man, according to police, was a "confused individual" who "appeared a little mentally unstable" but had no known apparent ties to extremism, the BBC reported.

The Telegraph reported that the masked gunman, who entered a movie theater in the town of Viernheim was "shot dead by police" following a standoff. The number of dead and injured is still unclear, but despite early reports as many as 50 people were injured, the Associated Press says, that no one was seriously injured by the gunman. Some inside the movie theater suffered minor injuries as a result of the tear gas used by police to take down the shooter.

Viernheim is a small town about 45 miles from Frankfurt with a population of only about 32,000, according to NBC News, which also reported there is footage from local media that "showed heavily armed police strapping on bulletproof vests and running toward the building as sirens blared."

Nonetheless, the world waited as the news broke, worried that the act had potentially been linked to terrorism, but no such word came, much to the public's relief. Europe has been on edge following deadly attacks in both Paris and Brussels within the past 12 months, and fears of another attack inspired or directed by ISIS were ratcheted up further after the terrorist group allegedly released a message in late May calling for attacks on the United States and Europe during the holy month of Ramadan, which began at sunset on Sunday, June 5 and ends on the evening of Tuesday, July 5.

Excerpts of the alleged recording were published by several Twitter accounts, but could not be independently verified. "The smallest action you do in their heartland is better and more enduring to us than what you would if you were with us," ISIS spokesman Abu Muhammad al-Adani allegedly declared in the message. "If one of you hoped to reach the Islamic State, we wish we were in your place to punish the crusaders day and night."

He reportedly went on to encourage lone wolf attacks on the West in order to "win the great award of martyrdom."

These "lone wolf" style attacks have been particularly devastating in the United States, with attacks in both San Bernardino and most recently, Orlando reportedly linked to ISIS terrorism.

While it remains unlikely that the reported gunman in Viernheim was inspired to act by ISIS or Ramadan, the timing of the attack will continue to keep Europe and the United States on its toes.