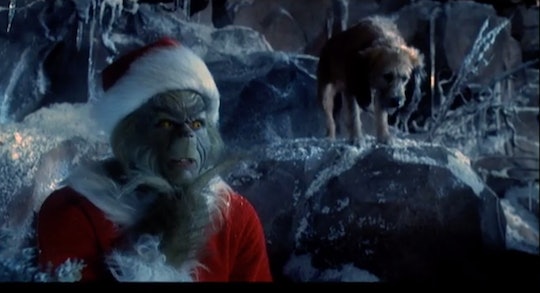 Sorry Guys, 'The Grinch' Isn't On Disney+ — But You Can Still Stream It Elsewhere

Now that December is in full swing, families are likely streaming their favorite holiday movies via Netflix, Disney+, and more. Films such as Home Alone, Elf, The Polar Express, The Santa Clause — and of course all of the claymation classics — are holiday staples in many households. Another December favorite is the 2000 hit, How the Grinch Stole Christmas. But is The Grinch on Disney+, alongside other Christmastime classics?

To be clear, it's not the 1996 TV movie, nor the 2018 animated re-make, to which I'm referring. Nope. It's the 2000 version starring Jim Carey that many people seem to be on the prowl for. And because the newly-released Disney+ seems to have everything under the sun you could possibly want to watch, users have likely been looking for How the Grinch Stole Christmas. But alas, these searches are fruitless.

Sorry to break it to you, but How the Grinch Stole Christmas is not on Disney+, mostly because Disney doesn't actually own the film. (It was produced by Universal Pictures.) And now for the good news: Streaming rights for the movie currently belong to Netflix. So those who have a Netflix subscription are still able to get their Jim Carey Grinch fix, at least if they live in the U.S, that is. Because apparently, the 2000 version of the movie disappeared mere weeks before Christmas for those in the UK.

So why can't British Netflix users watch How the Grinch Stole Christmas? It all has to do with streaming rights — and apparently Netflix's rights to stream it expired at the most inopportune time ever.

“Netflix licenses TV shows and movies from studios and content providers around the world, and those licenses can expire if we don't renew them. Though we strive to keep the content you want to see, we acquire licensing rights for TV shows and movies for a certain period of time — not indefinitely — so some titles do leave Netflix,” a representative from the Netflix Help Center told the Daily Mail. "If a TV show or movie you love is leaving, it indicates that our licensing agreement with the content provider is about to end. Whenever a TV show or movie is expiring, we evaluate whether or not to renew it using the same criteria we apply to potential new content.”

For the record, if you happened to enjoy the 2018 version of The Grinch — starring Benedict Cumberbatch — that's also available on Netflix. (Sorry again, for those who only have Disney+.) The 1996 cartoon of the grumpy, green Who, however, is a bit trickier to find. You can rent it on Amazon Video for $3.99 or own it for $7.99.

So no, the 2000 version of The Grinch isn't on Disney+. (Womp, womp.) But hey, Disney+ does have a few amazing holiday classics Netflix doesn't, like Home Alone, The Santa Clause, The Muppet Christmas Carol, and A Christmas Carol (starring Jim Carey, if you really need your Jim Carey fix.) Not to mention the new movie Noelle, starring Anna Kendrick, which has received decent reviews so far.