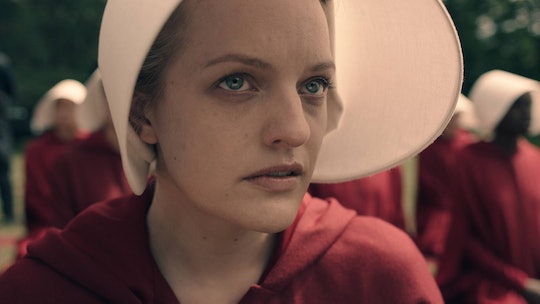 Hulu's new series The Handmaid's Tale tells a chilling story that can feel uncomfortably relevant despite its dystopic setting. It takes place in the near future of an alternative version of the United States that has been renamed Gilead after being taken over by a conservative totalitarian regime. Women are assigned to one of three functions: they can serve as either wives, servants (called "Marthas"), or Handmaids. Women who can't or won't conform are sent to do hard labor in toxic environments. A Handmaid's only purpose in life is to carry children for the high-ranking officials and their wives, who are largely infertile. Such an incredibly detailed world certainly sounds like it might have been a novel first, but is The Handmaid's Tale based on a book?

Indeed it is, and there's a good chance it's a book you've heard of before. Penned by Margaret Atwood in 1985, The Handmaid's Tale received an immense amount of acclaim and went on to resonate with readers (particularly women) for many decades. With its ordered, color-coded roles for women, the world of Gilead might at first seem far removed from the modern world on the surface, but it isn't. Like all good speculative fiction, The Handmaid's Tale exposes the flaws in our society by taking them to metaphorical extremes.

The Hulu adaptation promises to expand on the world created by Atwood in her novel. Critics have described it as true to the spirit of the book if not a word-for-word adaptation; considering Atwood worked on the series, she likely supported and helped with these changes. The novel tells the story through the point of view of one Handmaid named Offred, and part of the experience is in her limited perspective and how deeply personal that makes the story. While her point of view is still integral to the series (where she's portrayed by Elisabeth Moss), the change of medium allows other stories to be told as well.

The current state of politics in the United States is sure to make The Handmaid's Tale feel horrifyingly plausible, but part of the point of both the novel and the show is that this could happen at any time in history — and has, to some extent. Women (and people of color and LGBT+ people) have faced many of the same issues and dealt with many of the same fears for centuries. Those worries are always there, and it's all too easy to see how things could take a turn for the worse.