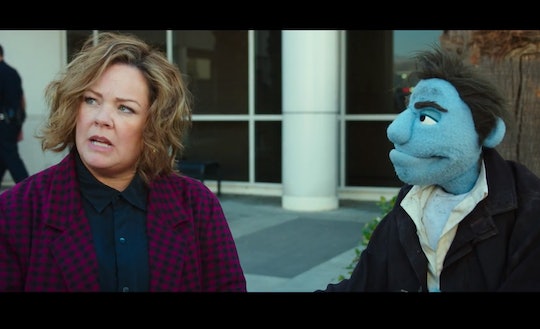 When a movie with puppets hits screens, kids everywhere will see the trailer and likely take notice. But one such movie is set to release and, in this case, it's really important to know whether The Happytime Murders is for kids or adults. There are some stark clues about the tone and intent of the film, which mixes puppets with people in the style of The Muppets. But this story is going places that the groundbreaking show never did, and it’s pretty clear about who should come along for the ride.

The first giveaway is the “R” rating that it carries from the Motion Picture Association of America, as shown on the film’s website. Next is the website’s description of the story: “No Sesame. All Street. The Happytime Murders is a filthy comedy set in the underbelly of Los Angeles where puppets and humans coexist. Two clashing detectives with a shared secret, one human (Melissa McCarthy) and one puppet, are forced to work together again to solve the brutal murders of the former cast of a beloved classic puppet television show.”

That doesn’t leave much room for doubt that this is not only an adult film, but it’s one that won’t appeal to every adult. But if there is a sliver of doubt, a quick look at the trailer will take care of it. The clip features a stripper pole, puppet cleavage, and a surprising amount of puppet carnage. It also includes the description, “The director of The Muppet Christmas Carol, Muppet Treasure Island, Muppets Tonight is finally ready to reveal what goes down when kids aren’t around.”

McCarthy stars alongside Joel McHale, Maya Rudolph, and Elizabeth Banks, according to the film’s website. It’s directed by Brian Henson, who is the son of beloved Muppets creator Jim Henson, according to Collider. In an interview with the site, Henson discussed the live improv show using puppets that he created called Puppet Up!, which is billed on its website as “Puppets behaving badly.” The fun he’s had doing that show was the push he needed to move forward on The Happytime Murders. As he told Collider:

And we started doing improv comedy with puppets. And we do a live show that’s very R-rated, that’s improv comedy. And then I thought this is really good. We found a new voice for puppets. It’s really funny. It’s kind of viciously funny. And it’s a contemporary funny. And I thought, oh this is good. This is a good next place to take Henson-style hand puppetry. As a place to take Henson-style hand puppetry.

Henson and company have gotten creative while promoting the film, too. They set up a pop-up tattoo parlor and puppet speakeasy in Hollywood that was open for a week and free to enter, according to the Los Angeles Times. Adam Fogelson, chairman of STX Films, the company behind The Happytime Murders, told the paper, “[The pop-up] came from an authentic belief that Henson puppets, with some exceptions, by design are adults that behave appropriately for and around children as their job. When they’re off the clock, they are adults too.”

It seems that this could be one of the most groundbreaking films of the year, or it may not be, depending on who's watching it. Either way, it’s definitely not for kids.