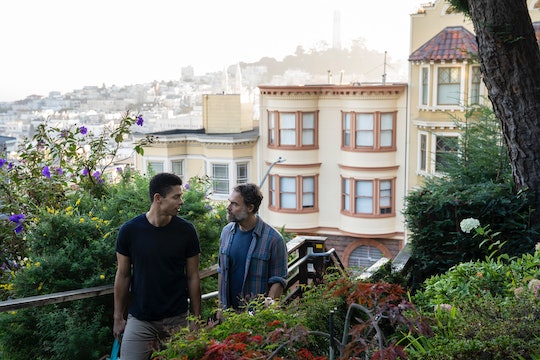 Based on the serialized newspaper columns-turned-novels of Armistead Maupin, Tales of the City tells the story of a group of fictional characters living at 28 Barbary Lane in the Russian Hill neighborhood of San Francisco. But newcomers to the story may be wondering if the house in Tales of the City is real. The address is entirely fictional, but both the Netflix version of the series and its earlier television adaptations are fashioned to resemble the real place off of which Maupin based 28 Barbary Lane.

Tales of the City is something of a gay cat with nine lives, returning this summer for a fourth limited series adaption. Earlier adaptations were produced in 1994, 1998, and 2001 by PBS and later Showtime in conjunction with Channel 4. But Netflix takes on the beloved classic with more queer creatives behind the scenes and in front of the camera than ever before.

Maupin began writing Tales of the City in San Francisco in the late '70s, with his characters living in the same place and time. That meant telling a sudsy but authentic tale of queer life just a few years after the modern queer liberation movement began, and in one of the epicenters of queer living. 28 Barbary Lane, then, became a safe haven for Tales of the City's characters to return to, giving the story both grit and warmth. In the novels, the apartment complex is an old boardinghouse run by a transgender landlady named Anna Madrigal. According SF Weekly, the real Barbary Lane is actually a two-block pedestrian lane called Macondray Lane.

"Macondray Lane is a small pedestrian lane on the south-eastern side of Russian Hill," SF Weekly notes. "The quiet and ivy covered pathway extends two blocks east-west between Leavenworth and Taylor, paralleling Union and Green." The Leavenworth Street end of the lane features a wooden arch as its entryway, while the other side descends down a set of wooden steps that spills out onto Taylor Street. The iconic wooden staircase appears in both the 1994 PBS miniseries and in the trailer for Netflix's revival.

By comparison, here's how 28 Barbary Lane is described in the stories:

The house was on Barbary Lane, a narrow, wooded walk-way off Leavenworth between Union and Filbert. It was a well-weathered, three-story structure made of brown shingles. It made Mary Ann think of an old bear with bits of foliage caught in its fur. She liked it instantly.

In a 2014 SF Weekly interview, coinciding with the release of the final novel in the Tales of the City series, Maupin revealed that he wanted to craft "a fictional address that would become so real to people that they would go looking for it." Needless to say, Macondray Lane has become a tourist attraction in its own right, thanks to him.

The Netflix series, which did shoot in San Francisco, relied on much of the original cast from the 1994 miniseries. Laura Linney and Olympia Dukakis, who originated the roles of Mary Ann Singleton and Mrs. Madrigal, respectively, have returned to reprise their roles in every version of the series that's ever been made. Netflix's adaptation jumps forward in time to present day San Francisco, but features plenty of flashbacks, as well as newly introduced characters. Newcomers to the story and longtime fans alike can tune into Tales of the City, now streaming on Netflix.