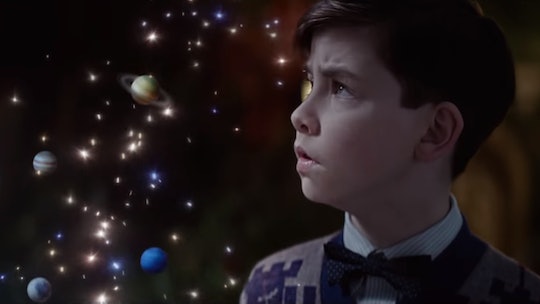 Is 'The House With A Clock In Its Walls' OK For Kids Under 10? Here's What You Need To Know

Every fall, theaters transition from summertime blockbusters to FrightFests that lead into the Halloween holiday. But this year one movie has families thinking they all might make it to the theater after all. A magical little film is coming out from Universal Picture and Amblin Entertainment will premiere this weekends and parents might be wondering if The House With a Clock In Its Walls is OK for kids under 10.

The short answer to that is that the Motion Picture Association of America seems to think it’s appropriate for kids at least right around 10. They’ve given the movie a PG rating, according to Box Office Mojo, rather than the slightly more restrictive PG-13. (For reference, the first three Harry Potter movies were PG, Box Office Mojo said.) The film’s website says that its rating is based on “thematic elements including sorcery, some action, scary images, rude humor and language”.

For some parents, that’s enough information already, but for most kids those elements fall somewhere in the middle of what they’re old enough to entertain without being afraid. As with any content that’s going to be seen by kids, it’s a better idea to take into consideration the specific elements of the story, as well as the maturity of the child.

The film is based on a middle-grade book written in the 1970s by John Bellairs and illustrated by Edward Gorey, according to the film’s website. The movie’s synopsis, as released by Universal Pictures, reads:

The magical adventure tells the spine-tingling tale of 10-year-old Lewis (Owen Vaccaro) who goes to live with his uncle in a creaky old house with a mysterious tick-tocking heart. But his new town’s sleepy façade jolts to life with a secret world of warlocks and witches when Lewis accidentally awakens the dead.

There have been two trailers released for the movie and it’s a good idea to watch them both. The first is much more sinister, while the second plays up the joking, whimsical aspects of the tale.

Here is the first trailer:

Here is the second:

The movie’s director is Eli Roth, previously known for shock-horror movies like Hostel and The Green Inferno, according to his IMDb page. That might immediately dissuade some parents from even considering the film, but in an interview with Vulture, Roth made it clear that he understood the format he was working in, and even drew inspiration from it.

“I’ve always wanted to do my version of a kids’ movie," he told Vulture. "And by that I mean a film like Time Bandits or Beetlejuice or Gremlins or Goonies. As much as I love and am known for really gory movies, those kind of Amblin movies were my earliest theatrical experiences. Nobody does it better than those early Spielberg movies."

Because of the sorcery, it seems nearly impossible that The House With a Clock In Its Walls won’t draw comparisons to Harry Potter. In truth, those movies might not be the worst yard stick to measure by. If you were comfortable letting your child watch the earliest Potter films, and they didn’t suffer any ill effects, they might be alright with this brand of fantasy. If not, give them another year and watch it on home viewing. Maybe in daylight.

More Like This
'Squid Game' Is Coming Back For Season 2 On Netflix: Here’s What Parents Need To Know
15 Awesome Movies For Families To Watch During Hispanic Heritage Month
Here's Where The 'Hocus Pocus' Characters Are 30 Years Later
10 Facts About 'The Nightmare Before Christmas' That May Surprise You