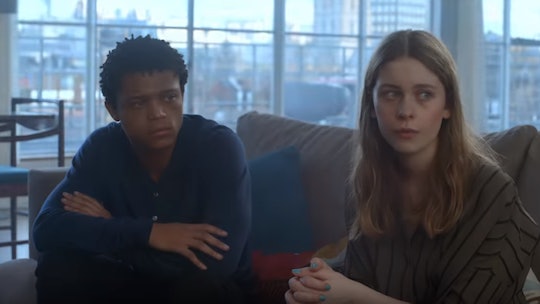 Vampire and werewolf love stories have been wildly popular throughout the years, but Netflix's new series, The Innocents, is counting on giving the young adult genre an update. It tells the story of a young, supernatural romance which may have you wondering, is The Innocents based on a book?

While it does share a name with a few projects, this Netflix series was created specifically for TV. The Innocents was used as a title by author Ace Atkins for his 2016 action novel, and was also used by Francesca Segal for her 2013 adaptation of Edith Wharton's The Age of Innocence. In 1961, Truman Capote wrote a horror film with the same title based on Henry James' Turn of the Screw, and in 2016 it was used for a French film about the secret pregnancies of Polish nuns during World War II.

But Netflix's The Innocents is completely unrelated to any of these works, and its original story was written as a screenplay by showrunners Hania Elkington and Simon Duric. In an interview with The Upcoming, the duo revealed that they came up with the idea for the show at a bar over beers. “We used to hangout at Beer Gardens in North London and just throw ideas around,” said Elkington. “There’s simply a really good interlock of our tastes that we wanted to build a world together in.”

The two put their heads together and created The Innocents, a series about June (Sorcha Groundsell), a young girl who runs away with her boyfriend Harry (Percelle Ascott) in order to escape her overprotective father. As they dream of building a life together, they discover that June has supernatural powers that allow her to shape-shift into anyone she touches. Their new life into the world of the supernatural puts Harry and June’s relationship to the test, but June’s strong will keeps them moving forward.

When talking to Decider, Elkington and Duric explained that the idea of The Innocents came to them through their love for supernatural genres and human stories. “Simon had been tooling around with the idea of shapeshifting, shifting into animals, maybe brother and sister, and I’d been thinking about a young relationship with a very challenging female lead and how to really explore in a bold way some of the more difficult aspects of adolescence,” said Elkington. “We suddenly realized with our very different inspirations and tastes, we could create something that felt very unusual.”

But creating a new supernatural genre from scratch wasn’t so simple. In the same Decider interview, the showrunners detailed how they had to create a whole methodology and mythology behind their shapeshifter concept. Elkington explained that while vampire and werewolf mythology is widely popular, people couldn’t grasp how the aspects of a shapeshifter would work. “So we spent a lot of time figuring out the rules, and where the gene has come from and why it’s manifesting in women,” she told the outlet. “Lots of long nights drinking beer and getting into it.”

While The Innocents may not be based on a book or novel, if you’re a fan of YA fiction, this story may be right up your alley. The Innocents premieres on Netflix with its entire 8-episode season on August 24.