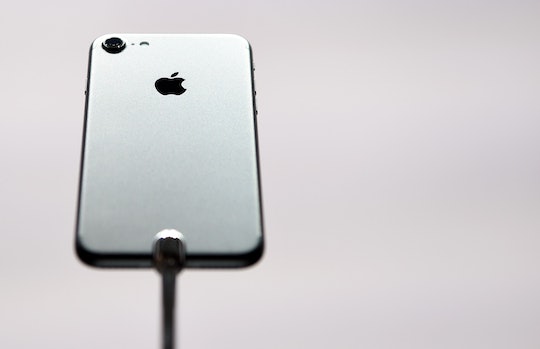 Is The iPhone 7 Kid-Proof? Reviews Say It's Pretty Durable

Last week Apple previewed the new iPhone 7 with new features like a virtual home button and AirPods, the brand's next-generation wireless ear buds. But there are also new features that seem tailor made for parents that might make you want to give the new iPhone 7 a second look, namely, its new water-resistant design that will make things just a little less anxiety-inducing the next time you hand your phone over to your cranky toddler in a restaurant. So is the iPhone 7 kid-proof? Most of the reviews so far say it's pretty durable.

If you're like me and the parent of a young kiddo, your phone has likely been thrown, dropped, cried on, drooled all over, and that's just before breakfast. Kids love our phones, and in a pinch, parents need a phone that can stand up to the brutal punishment those sticky, stubby little fingers can dish out. Plus, you need a good camera to fill up everyone's social media feed with pics of your little supermodel, and Apple has a slick new setup on the iPhone 7.

According to a review from The New York Times, the difference in the camera equipment in the iPhone 7 is the addition of a "optical image stabilization" feature that keeps the picture focused even if your not holding the device perfectly still. The new iPhone 7 Plus adds in a second camera on the back of the phone. "The two cameras work together to show the photo's main subject clearly while gently blurring the background," The Times review reported.

But besides the typical bells and whistles, it's the new iPhone 7's features which were designed for durability that should catch every parent's attention. First, it's water resistant. Not water proof, mind you, but according to the Times review, it was still alive after being submerged in a water pitcher. That's why the headphone jack had to go, to keep the phone water tight.

If you want to input anything to the device, users will now have to rely on the deeply reviled lighting cords, according to Quartz. But given the tradeoff of increased durability and waterproofing... it's sort of worth it.

The other change in the iPhone design that was intended to boost durability is the new virtual home button, which is supposed to fix the issue many iPhone owners have with the buttons giving out, the Times added.

Here's a pretty comprehensive iPhone 7 review from TechCrunch that explains it in detail:

An if you're getting excited about the prospect of a new jet black iPhone 7 — one that your kid's magic marker and raspberry jam stains won't defile — you're not alone. Check out this tweet from Harvard Zhang, a Bloomberg intern, that shows people already lined up around the NYC Fifth Avenue Apple store to be among the first to score a new iPhone 7:

Among those camping out, according to Zhang's comment on the image, the group includes a professional line sitter who is being paid $3,400 for a week. (There are worse ways to make a few thousand bucks.)

All in all, with all the fancy new upgrades and features, paired with the increased overall durability, it seems parents everywhere will want to consider updating their handsets to the newest iPhone model.