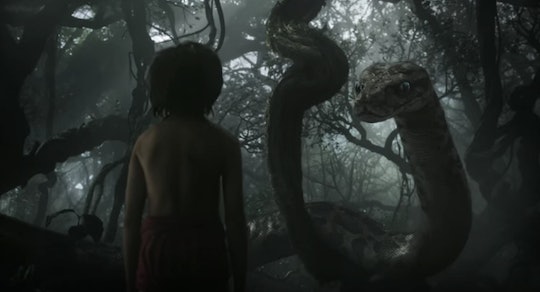 Is 'The Jungle Book' Appropriate For Kids Under 5? It Has Some Scary Moments

Disney is remaking, reworking, and rebooting its animated classic, The Jungle Book, and fans of the original should be warned that this new release is going to be much different. Remember, the original was a rollicking, musical, heartwarming laugh-fest full of animated hijinks. This new version is made by the same people that created The Pirates of the Caribbean. They pride themselves on making films that straddle the line between realism and fantasy and appeal both to kids and adults. But is The Jungle Book movie appropriate for kids under 5? That all depends on what certain kids find scary.

Since this new version doesn't have the same musical factor as the original, Disney beefed up the narrative aspects of the film. It delves into the psyches and backstories of villainous characters like Shere Khan and Kaa in order to understand why they might want Mowgli to suffer (as if being a human in the jungle weren't enough!). This approach makes the film much more of a thriller than its predecessor. It confronts the fact that Shere Khan wants a little human boy dead. In the original, death is implied, sure. Danger is implied, but Shere Khan isn't painted as a disturbed psychopath; he's just a tiger. This slight change makes the film much more narratively sophisticated, but also introduces more mature topics, like revenge, hate, and murder. The threat isn't so amorphous as it was before; Mowgli, in the new version, is very much in danger.

According to Variety reviewer Andrew Barker, "Maintaining the buoyant heartbeat beneath all the digital flash, [director] Favreau never loses sight of the fact that he’s making an adventure story for children." That said, he also added that one scene was "just short of something that would trouble children’s sleep." The appropriateness of the plot largely depends on your child's threshold and experience with scary stories.

But the story isn't the only thing that can be frightening about this film. It's a CGI whirlwind that mixes live action and computer-action almost seamlessly, to sometimes wondrous and sometimes startling effect. If this is anything like The Pirates of the Caribbean, undoubtedly there will be moments that make viewers of any age jump in their seats. Giant snakes, tigers, bears, oh my! If your child is not fond of animals, this may not be the best family feature.

Ratings for the film are beginning to reflect its sometimes frightening content. Indian censors branded the film as too scary for kids, The Guardian reported. They said the realistic CGI animals were "startling" and gave it a PG rating to warn parents. In America it's also being released with a PG rating for "some sequences of scary action and peril." If you have children under 5, it may be better to start them with the original Disney classic, then introduce them to this version in a few years when they have more of an understanding of fantasy and fear.