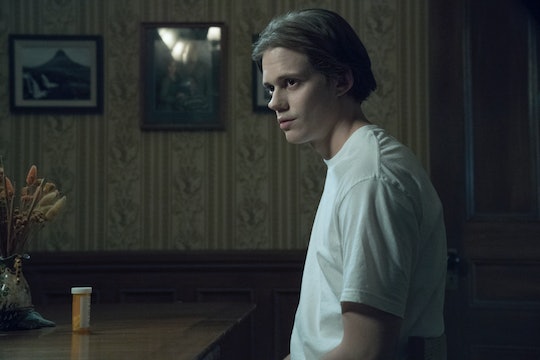 The Kid Might Just Be A Good Guy On 'Castle Rock'

As the plot thickens in Castle Rock, the mystery surrounding The Kid is thickening too. On the surface, The Kid comes across as an evil, brooding character, and Pangborn even refers to him as the Devil. But other than giving a sinister gaze here and there, he’s never been seen doing any actual harm. So is The Kid actually a good guy on Castle Rock? He might deserve the benefit of the doubt.

Warning: Spoilers for Season 1 Episode 8 of Castle Rock ahead

In Episode 8, “Past Perfect," The Kid (Bill Skarsgård) reveals a little bit more about himself, and he doesn't seem to be the menace he was originally made out to be. When he takes Henry Deaver (Andre Holland) to Alan Pangborn’s (Scott Glenn) body, he tries to explain that Ruth (Sissy Spacek) shot Pangborn out of confusion, and prompts Henry to help him hide the body in the woods. "We have to protect her," he says. Then, at the sound of police sirens closing in, The Kid rushes out of the barn, and reveals his frustration with Henry. “I waited for you. I waited for 27 years,” he tells him. “I rescued you from that basement, and I didn’t ask for any of this.”

If The Kid was truly a bad guy, he wouldn’t have tried to protect to Ruth, and he certainly wouldn’t have rescued Henry all those years ago. Would he? On Reddit, users have been running with the theory that The Kid is actual an angel. Reddit user Rampage97t theorized that The Kid is in Castle Rock to “judge and punish those who have sinned.” User jackie-torrance had a similar thought, theorizing that the Kid is a fallen angel, channeling the town’s sins. “Lacy asked God to send salvation to Castle Rock, and I think God answered,” the user wrote. “Lacy just didn’t understand that the Kid he sent was almost like the angel that was closest to the door, an inherently flawed, fallen angel who struggled with control of his power.”

Another good-guy theory from jackie-torrance is that The Kid is from another reality. “I think the Kid is the biological child of Ruth and Pastor Deaver, the one that supposedly died. However, in another reality, I think he lived, was raised by the Deavers, and was subjected to the same ‘do you hear it now?’ experiments that Henry Deaver was in the reality we know.”

While The Kid’s dialogue has been scarce and vague, he has never said anything evil or malicious. In fact, when he was on the rooftop with Molly in Episode 4, he told her he should have remained locked up. “I shouldn’t be here, I should still be in the hole,” he says, almost regretfully.

So if The Kid isn’t to blame for all the murderous chaos in Castle Rock, who is? Some fans think that Henry Deaver might be the one to blame. “Anyone else getting the vibe that Henry is the one actually causing all the s*t and not the kid?” asked Redditor fure_elise. “I mean no one truly went crazy til Henry got there...except for Lacey.”

Reddit user cheddarmac pointed out the bird falling onto the bus in Episode 8, writing, “Once again, dead birds falling from the sky around Henry. This time the Kid isn't there for viewers to blame.”

Why bad things are happening in Castle Rock is still a mystery, but as far as I can tell, it definitely has something to do with Henry, The Kid, and the 1991 incident in which Henry went missing. Castle Rock is full of secrets, so it’s hard to tell who or what the bad guy is. With only two episodes left in the season, fans will have to just wait to see how things unfold.