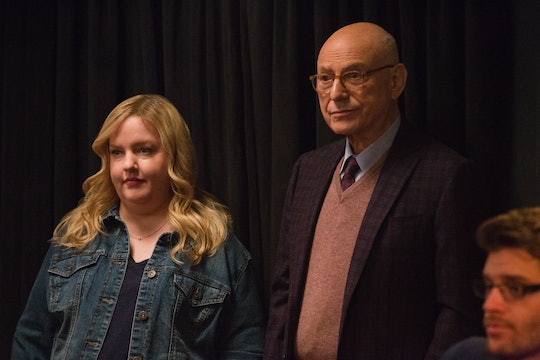 The Inspiration Behind Netflix's New Series 'The Kominsky Method'

On Friday, Netflix dropped the eight-episode first season of The Kominsky Method, which tells the story of two friends journeying through old age together. Even before the nuanced and hilarious show hit the streaming platforms, fans were wondering what inspired it. Is The Kominsky Method based on a book?

As it turns out, The Kominsky Method is an original work and as such is not based on a book or any other source materials. Chuck Lorre, best known for his work on the sitcoms Mom, The Big Bang Theory, Two and a Half Men, and Mike & Molly, is also the brains behind The Kominsky Method. Unlike the aforementioned multi-cam, laugh-track-fueled shows, the single-camera Netflix show finds its humor in tragedy. The Kominsky Method follows Sandy Kominsky (played by Michael Dougles), an acting teacher mourning his past acting career and his three failed marriages while his agent Norman Newlander (played by Alan Arkin) faces different challenges — his wife Eileen is dying of cancer. In the first episode, she tells Sandy that she wants him to look after Norman after she's gone, and he agrees.

“Part of the joy of this is, the friendship of the two supports them through trials and tribulations of what they’re going through with family and money and health and loss,” Lorre told USA Today about the show.

Even though The Kominsky Method is not based on a book, it seems like Lorre was inspired by his own experience aging. “I just turned 66, and I’m wired to see that there’s comedy there,” Lorre told The New York Times in an interview. “Inside the aging body is this witness that thinks it’s 18. There’s the cognitive dissonance of, what’s happening to me? When I’m not crying, it’s funny.”

While Lorre is best known for the sitcom formula, he was able to let his creative juices fully flow while working on The Kominsky Method because of Netflix's loose leash. “It’s wonderful to not have time limits. Thirty-two minutes, 28 minutes, just tell a good story," he told Variety. “The story can flow without having a break ... When you put eight episodes out all at once, they’re like chapters in a book. So if somebody is watching show 4, you can assume they’ve watched episodes 1, 2 and 3, and they may have just watched them so it can flow like a novel, as opposed to last week.”

The Kominsky Method employs a nice mix of deep, existential moments with classic Chuck Lorre gags. "You know I wake up every morning and my first thought is, 'What part of me's not working today?'" Arkin's Norman muses in a scene from the show. "We are passengers on boats slowly sinking," Douglas' Sandy responds. "Your boat is slow? I'm like when the Titanic was pointing up!" Norman retorts. Get ready for a boatload of prostate jokes, y'all — with a healthy dash of existential crisis baked in for good measure. All eight episodes of The Kominsky Method hit Netflix Friday, Nov. 16.