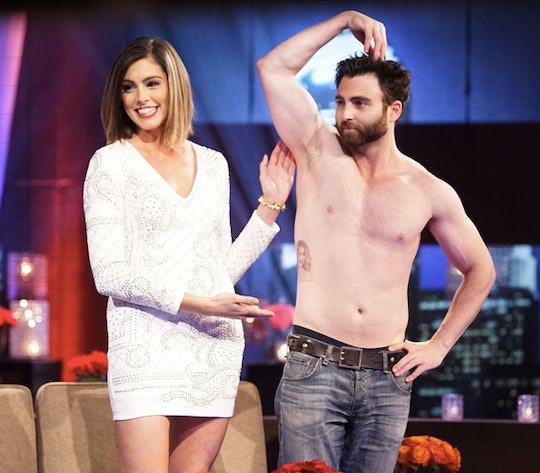 Is The Lace Tattoo Real On 'The Bachelor: The Women Tell All'? It's Certainly One Way To Win Someone Over

It's been quite the ride for Lace Morris on The Bachelor. Lace's time on the show certainly elicited a strong response from fans, but one fan might have officially won himself Lace Morris' #1 Fan title by permanently decking out his body with Lace swag. On "The Women Tell All" episode of The Bachelor, Lace meets a man who tattooed her face on his body, and no I'm not kidding, and yes, we should be maybe be concerned. But, is the Lace face tattoo real, or are The Bachelor producers just pulling a fast one on us? (Romper reached out to ABC about the man's involvement with the show and if they could speak to if the tattoo was real. They had no comment.)

Each reunion show, Chris Harrison calls upon the contestants that caused a stir in the Bachelor Nation community. This year is no different, and as we all know, Lace was definitely one of the main contestants that had people talking. Naturally, Chris Harrison wants to talk about Lace's time on the show, after the show, and where she's at in life in general. A quick update: Lace still lives by the idea that she should love herself before loving someone else. She's also nixed the word "crazy" from her vocabulary.

It's then that a random man in the audience yells to the stage that Lace is crazy — but wait — he doesn't mean it like that. The man explains that Lace is crazy beautiful and says, "I don’t want to seem crazy myself, but I have to show you this one thing." Cute, right? Just wait until the next part.

The big surprise is that he has Lace's face tattooed on his ribcage. Take a moment and reread that. Really let it sink in. A man, who does not know Lace, tattooed her face on his person. I mean, I think Lace is pretty great for deciding to leave the show when she felt it was necessary, but do I admire her decision enough to permanently tattoo her face on my ribcage? Probably not, no.

After the two took a selfie, the man returned to his seat (or was maybe escorted out of the premises) and Chris and Lace went on to talk about everything BUT the fact that a man has a tattoo of Lace on his body. No one even asked him if it was real. I'm hoping they just all assumed it wasn't. Then again, this is The Bachelor, let's not rule anything out.