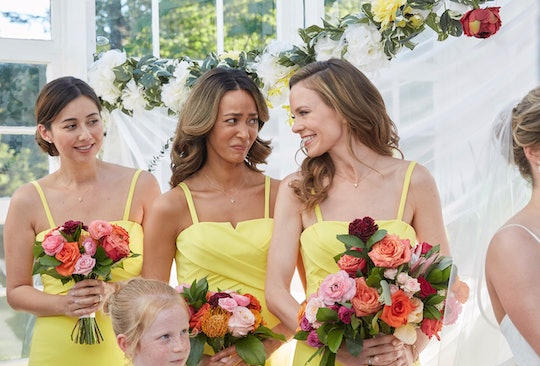 Hallmark's 'The Last Bridesmaid' Will Have You Saying "Been There, Done That,"

Movies based on true stories get an automatic second glance from me. There's something about the possibility of the story actually happening that makes me more invested in the plot and characters. Hallmark is one of the top networks for dishing out feel good, from-the-heart, original films. Some of those are pulled from real experiences, while others are expertly crafted fiction that only feels real. With the June Weddings lineup going strong, is The Last Bridesmaid a true story? Here's what I know.

The answer is yes and no. In an interview with Hidden Remote, leading actress and executive producer of The Last Bridesmaid, Rachel Boston, said the story was partially inspired by something that happened to her. "The bulk of it did start at my brother’s wedding," she said. "I was the maid of honor and everyone at that wedding started asking me, because I’ve done so many wedding movies, when are you getting married?" I'm sure it's something that happens to a lot of women, which is how the idea came to fruition. She continued saying that little "spark" led her to producer, Joel Rice and screenwriter, Nina Wineman (who she previously worked with on Stop the Wedding). "Just really talking to them about what it’s like being a career woman that is always asked that question," she said. "This one was really extra fun."

It sounds like this wedding-themed Hallmark flick is a little realism but mostly fiction. "It’s very relatable, because it’s an experience I was going through," Boston added in the same interview. As for what happens in this two-hour rom-com, the journey follows Becca as she prepares to be a bridesmaid in her cousin, Lucie's wedding. Oh, and it's her 10th time as a bridesmaid. Don't worry — she's not salty about it. Actually, Becca believes love will find her when the time is right. Lucie tries to set Becca up with the best man, but Becca inadvertently falls for videographer, Kyle, who films in the weeks leading up to the main event. As they're spending a lot of time together, they find they may not have everything in common, but instead challenge one another to do, and be, better.

There are quite a few movies about the quandary bridesmaids find themselves in — especially when everyone around them marries and they're the only one left to find love. Some become big hits (Bridesmaids), and some play on the multiple weddings theme (27 Dresses), but The Last Bridesmaid seems like it takes a little bit of all of those and pulls it into one film.

Even if The Last Bridesmaid isn't full-on nonfiction, it's still based on those simple grains of truth. I'm sure most women can appreciate the journey Becca goes on. She's supporting all the brides in her life, while remaining optimistic she'll have her happy ending, someday. It's pretty relatable. Even if the story itself doesn't sound like your thing, give it a chance. Sometimes love stories don't unfold the way you think they should — and that's a good thing. The Last Bridesmaid will ultimately leave you feeling like, no matter what the circumstances, good things will happen to you in their own time. OK, so maybe that's too deep, but at the very least, this is two hours of rom-com bliss and you can't beat that.