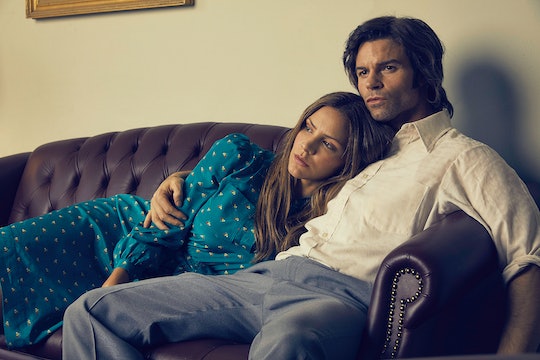 The trailer for The Lost Wife of Robert Durst may seem like a traditional Lifetime movie: a woman marries a man whose personality seems to change overnight, turning their domestic bliss into terror. But the difference in this case is that The Lost Wife of Robert Durst is based on a true story. It explores the marriage of Robert Durst, whom most will remember from HBO's documentary series The Jinx, to his first wife Kathleen "Kathie" McCormack Durst, who went missing in 1982 and was never seen again. Her disappearance has never been solved and no one was ever charged in relation to her possible death.

Kathie and Robert first connected in the early 1970s after she moved into an apartment building owned by his family; Robert's father was a real estate mogul who owned multiple properties in New York City, making the family incredibly wealthy. Though Kathie was nine years younger than Robert (19 to his 28), they hit it off immediately and became serious very fast, marrying in 1973. The early days of their relationship seemed to be happy and they lived a very glamorous lifestyle that involved jet-setting, hanging with celebrities, and multiple homes. But then, as The Lost Wife of Robert Durst indicates, things began to fall apart.

Robert became abusive and violent, something Kathie confessed to her sisters and to multiple friends. Once, he allegedly pulled her out of a family gathering by her hair. She went to the hospital after one of their fights to seek treatment for her bruises. Another time, she supposedly climbed out the window of their sixteenth-floor Riverside Drive apartment to escape him. When Kathie got pregnant, Robert demanded that she have an abortion even though she wanted the child. She began to tell friends and family that if anything ever happened to her, they shouldn't let Robert get away with it. From all accounts, Kathie seemed to be in fear for her life shortly before she vanished.

Kathie had been gone for four days before Robert reported her missing to the police, but he insisted that it was not unusual for her to be unavailable for days at a time. She was a med student hoping to become a pediatrician, and he had assumed she was too busy with work and school to call. He had last seen her on a Sunday when he drove her from their South Salem cottage to the train, so that she could return to Manhattan for class. She checked in with him when she arrived at their Riverside residence and then he never heard from her again.

Kathie's body was never found and there was little evidence to hint at what might have happened to her. The earrings she had allegedly been wearing when she disappeared were found in the Riverside apartment. Two witnesses had also seen her there, and someone using her name had called her school to say she was ill and wouldn't be able to attend class. But none of Kathie's friends had heard from her, and she was known to call them multiple times a day. And the witnesses had only seen her from a distance, from behind. Robert's story of that night also changed.

However, there were never any official suspects and Kathie's disappearance wasn't rule a homicide (without a body, that was difficult to determine). She was eventually declared dead decades later, but no one was any closer to figuring out what had happened to her or where she might have gone. No one seriously thought she had run away; she was embarking on a new career that she was excited about and she was almost done with school. Why would she leave?

Robert later became a suspect in two murders, though he was not convicted in either instance. Famously, The Jinx ended with him unwittingly being caught on a hot mic claiming that he had "killed them all." But without concrete evidence or a confession, it is impossible to know what happened to Kathie Durst. The Lost Wife of Robert Durst promises to tell her story, but it's one without an ending.