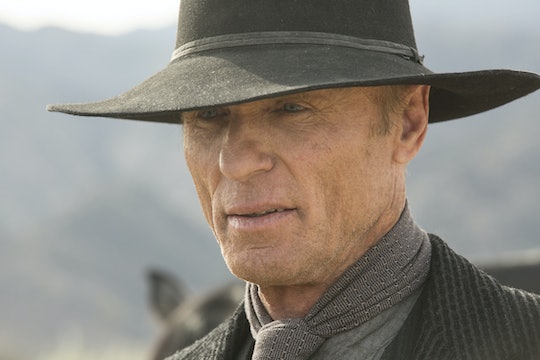 Is The Man In Black Human On 'Westworld'? Anyone Could Be A Robot

The robot hosts that populate Westworld are incredibly lifelike. So lifelike, in fact, that the guests and even some of the engineers have a hard time remembering that they're not technically human. This also means that the audience can't always tell who's human and who's not. So is the Man in Black a human on Westworld? My best guess would be probably, but at this point in the game, virtually anyone could be a robot.

It's a popular theory that at least one of the characters viewers have been reading thus far as human will turn out to be an actual host manipulated and controlled by Ford for whatever weird purposes he needs them for. Many believe, for example, that Bernard will turn out to be a robot in the end, perhaps even a robot version of Ford's old partner Arnold, who supposedly killed himself some 30 years ago, but still seems very much present in the real world, as evidenced by Dolores' confession and her sudden ability to tell lies and keep secrets. By this logic, anyone could be a robot, including the park's self-appointed villain, the black-hatted Man in Black played by Ed Harris. He appears to be human, in that he's impervious to the hosts' bullets, but who makes the rules here anyway? Maybe he is a robot.

What fans do know is that the Man in Black has been coming to the park for about 30 years, as he has said multiple times. Some eager theorists connected this to the fact that Westworld the series is inspired by the Michael Crichton movie Westworld from the mid 1970s. It was suggested that the Man in Black is a character from that movie, continuing to visit the park 30 years later. Perhaps he could even be a reincarnated version of the glitched-out host who began shooting guests all those years ago. Perhaps that was the "critical failure."

However, showrunner Jonathan Nolan told Entertainment Weekly that the reference to the "critical failure" was meant to be playful, but not literal. This would imply that viewers are not just watching a sequel of sorts to the events of that movie. Nolan also has stated explicitly that the contrast between the noble robot Teddy and the Man in Black was meant to reinforce the idea that the Man in Black represents everything that is human (and also repugnant). So of all the characters that could turn out to be androids, I have a feeling that the Man in Black is not one of them. But hey, you never know.