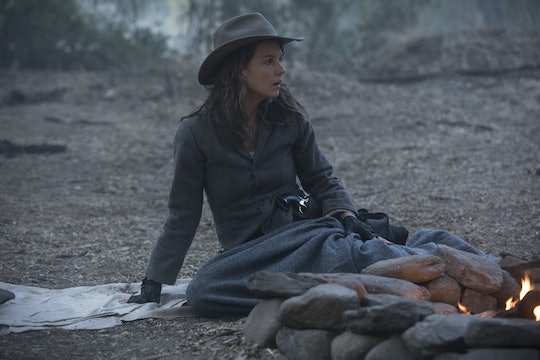 The Man In Black's Daughter Might Be Hiding Something On 'Westworld'

When half the characters on a show are hyper-realistic androids, it can be difficult to tell who's human and who isn't. Bernard fooled audiences (and Theresa) in Season 1, delivering quite a shock when it was revealed that he was really a host. Ever since then, it's been hard not to be suspicious of every new character. And the most suspicious of all is newcomer Grace — sorry, Emily. Could a similar reveal be in the works? Is the Man in Black's daughter a host on Westworld?

This theory has been gaining ground since Emily's introduction, and it would make sense if it turned out to be true. When Emily first appeared as a guest in the Raj, she was on the lookout for hosts in disguise as much as the audience was; she even tested her new paramour's humanity by aiming a gun at his chest and pulling the trigger. However, no similar test was performed on Emily herself to prove that she was a person.

After she joined forces with her dad William in Westworld, he flat-out asked if she was a host sent by the late Robert Ford to mess with him. Emily laughed off the question, but it was hard not to wonder, especially after everything viewers have learned in Season 2.

Many fans have speculated that the show would begin to venture further into host copies of real people. Bernard was based on Ford's business partner Arnold, after all. But Season 2 took that one step forward; apparently Delos has been trying to fuse human minds into host bodies, allowing some very important people to live forever. James Delos was the first (and most repeated) attempt and it failed every time. But perhaps someone did get it right, and they've been secretly creating host/human hybrids.

Westworld viewers on Reddit certainly seem to think it's possible. User joshy1227 speculated that Emily could be a host, specifically because of the quest Ford put William on to find something called "the Door." They said:

I think it might be Emily, and that in fact the Emily that we've been seeing in the park is already this host/human hybrid. My reasoning is, it seems like Ford's entire goal is to help the hosts be conscious and escape the park, so the most likely end goal of his game with William is to convince him that the hosts are conscious and that he should help them. In this case the 'door' might be the door out of the park, that William will open for the hosts. What better way than to get him on the side of the hosts than to put him face to face with his daughter, make him think that it's the real human her, and then reveal that she's actually a host copy? Then he'll have to make a choice whether he thinks this copy deserves to be free, or not.

Emily could be the guide William is looking for (which would make him seriously regret leaving her behind), the person who finally makes the stakes of the game realer than ever for him. And considering Emily's introduction, it does seem like the idea of fidelity is one that might come up again in her storyline. Why put forth the question that someone might be a host if you're never going to answer it?

Then again, it seems like a lot of work to put into something just to prank William. I'm sure Ford is nothing if not thorough in his trolling, but there would surely be more efficient ways to get William to reach the same conclusions. There's as much of a chance that Emily isn't a host as there is that she is one, and right now there just isn't enough information available to make the call. Only one thing is clear: whatever Emily is up to, there's definitely more to it than meets the eye.