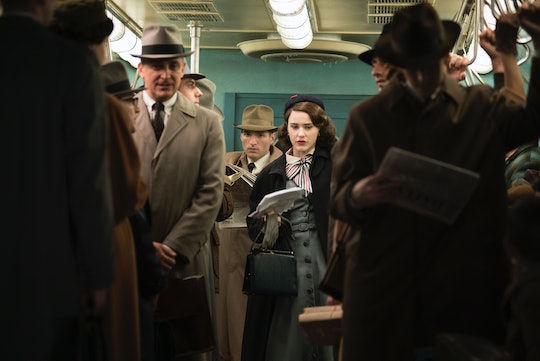 'The Marvelous Mrs. Maisel' Is Full Of Real-Life References

From the mind of Gilmore Girls creator Amy Sherman-Palladino comes a new Amazon series which has already been picked up for two seasons following its wildly successful premiere during Amazon's spring pilot season last March. The series stars House of Cards alum Rachel Brosnahan as a happy 1950s Jewish housewife turned boundary-bulldozing standup comedian. But is The Marvelous Mrs. Maisel based on a true story? Although Brosnahan's character has some real-life inspiration — and the period comedy incorporates a few real life historical figures — the story is completely fictional.

Sherman-Palladino's father was a comedian and so she "grew up with a bunch of Jews sitting around trying to make each other laugh," as she told Vanity Fair back in March. She was also close with Lenny Bruce's mother as a child, which inspired her to work Bruce into the series. He first encounters Midge Maisel in prison after she's been arrested for a provocative set at a comedy club. He's in the process of being bailed out himself and he tells Midge that comedy is a terrible business. But she takes it as encouragement, and he reenters the series periodically as a sort of "weird freaky guardian angel that comes in and out of her life."

Dan Palladino, Sherman-Palladino's husband and creative partner, clarified in the same Vanity Fair interview that it was "going to do a mix of some real people, some fictional people if it goes forward. But it’s not really a history of the period."

As for Midge, both Sherman-Palladino and Brosnahan cite Joan Rivers as an archetype off of which the character was based. Said the creator:

I’m a massive Joan Rivers fan; the world is sadder without her, and will always be sadder without her. And she had that wonderful mix, that battle of wanting to be accepted on a feminine level—[but] you can’t have that many balls and be accepted on a feminine level. It just doesn’t work that way. It was such a wonderful dichotomy, and she crafted those monster jokes.

But Rivers and Midge do have distinct differences. For example, it was important to Sherman-Palladino that Midge not be a woman who struggles to fit into societal expectations; instead, Midge is thrilled to be an Upper West Side housewife with two kids. Her life takes a turn when her husband abandons her and she finds her way into standup comedy by accident.

"Joan’s comedy came from a place of feeling like she never belonged. She always referred to herself as the ugly duckling," Brosnahan explained during a different Vanity Fair interview. "Midge is the opposite. She knows she is beautiful; she knows she is great at what she does, and she will be the first to tell you about it."

After she drunkenly stumbles into a comedy club in her nightgown and unleashes a vitriolic (and hilarious) rant about how her life has just fallen apart, Midge catches the attention of comedy club employee Susie (played by Alex Borstein). The character is fashioned after prolific talent agent Sue Mengers, who famously represented stars including Ali MacGraw, Gene Hackman, Burt Reynolds, and Barbra Streisand in the 1960s, '70s, and '80s. She used her bawdy humor and acerbic wit to climb the ranks in a male-dominated industry and died one of Hollywood's first and most iconic "superagents."

As for whether fans of The Marvelous Mrs. Maisel will catch all the references to the late-1950s/early-1960s comedy scene, Sherman-Palladino isn't too worried about it. "I think that as long as the story is clean and you understand emotionally what people are going through, if you want to understand the references, you can do it in three seconds [with Google]," she said to Vanity Fair. "If it works on two levels, that’s even better."

You can catch The Marvelous Mrs. Maisel on Amazon starting Wednesday, Nov. 29.