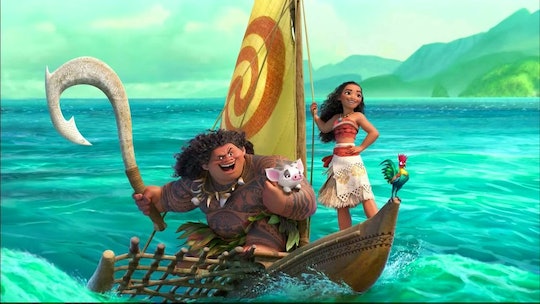 Is The Maui Legend From 'Moana' Real? The Demigod Has A History

Moana's grandma introduces Moana, and audiences all over the world, to the gripping legend of a demigod, Maui. Maui is voiced by Dwayne "The Rock" Johnson, and has a history of helping humans, like we've seen from other heroes like Hercules. Even Maui's tattoos look similar to the artwork in Herculean pottery. I am more than aware that Hercules is based off of Greek mythology, but as I watched Moana learn about the tales of her ancestors, I couldn't help but wonder, is the legend from Moana also real?

Surprisingly, yes. According to Movie Pilot, Maui was "created using multiple versions of the myth known in the Pacific: Maui can be found in the mythology of several islands such as Hawaii, Tonga, Samoa, Tahiti, French Polynesia and New Zealand."

In an interview with The Washington Post, Marie Alohalani Brown, a professor at the University of Hawaii at Manoa’s department of religion who is also part Hawaiian spoke about Maui in Hawaiian mythology.

"...He has both godly and human characteristics, and is viewed as an ancestor to the exalted, ruling class of Hawaii. In one of Hawaii’s most prominent creation myths, Maui is known for passing on the secret of fire to humans, drawing the Hawaiian archipelago together and slinging the sun so that it moves more slowly. He’s a cultural hero and a trickster."

In this way, the lyrics for Maui's song, "You're Welcome" are accurate to the Polynesian myths. He has countlessly lent his hand to humans. According to the New York Times, the demigod "once beat the Sun into submission with a jawbone and yanked the Hawaiian Islands out from the bottom of the ocean."

Mythological Maui differs from Disney in other ways. “Maui’s got these four big brothers, and he’s constantly hiding and sneaking around” Preston McNeil, the director of the animated short “Maui and the Sun” told the New York Times. We don't see his four brothers in Moana, but we do get a real sense that he is a troublemaker.

It's good to see that the research and thought behind the legend driving the film has the roots in reality the culture deserves. Not only does the film act as a vehicle for entertainment, but audiences might just learn something, and do a little more research after the film, too.