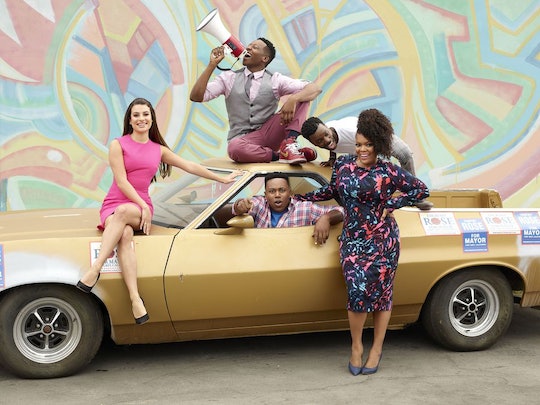 If you've heard about ABC's new sitcom, The Mayor, you may find yourself thinking that the plot sure does sound familiar to a certain presidential election in the year 2016. If so, you could also be wondering, is The Mayor based on a true story? I hate to burst your bubble, but while the plot of the show may take some inspiration from real life events, it is not, strictly speaking, a true story. Nevertheless, the show's main character was definitely drawn from real people.

In The Mayor, Courtney Rose, played by newcomer Brandon Michael Hall, is a 27-year-old struggling but talented rapper who has never actually held a real job in his life. He has the sudden, brilliant idea to run for mayor as a way to drum up some publicity for his mixtape. It seems like the perfect way to draw some eyeballs to his website, and there's no way he'll actually win. Except, of course, he does win, and now he has to figure out how to actually run the city and maybe even do some good for his community, with the help of his wise-cracking buddies, his wise and loving mother played by Yvette Nicole Brown, and Chief of Staff Valentina Barrella, played by Lea Michele.

The obvious comparison here is to the 2016 election, in which Donald Trump announced his candidacy and everyone initially assumed it was just a publicity stunt. Trump was a reality star and a fame-hound, not a politician. And then, to almost everyone's surprise, he actually won the election. But while Trump turned immediately to his old friends fear-mongering, race-baiting, and Twitter, The Mayor's titular mayor is out to see if he can actually make a difference in his town and do some good. He's kind of like the anti-Trump in a way, though their origin stories are similar. IndieWire writes, "That the first half-hour can feel like light, endearing fun while also functioning as an illustrated guide on 'How to Govern' for our current Cheeto-in-Chief only speaks to the series’ purity."

However, the series does have some other real-life inspirations behind it. The character of Courtney Rose was inspired by two well-known rappers, Chicagoan Chance the Rapper and Daveed Diggs of Hamilton fame, who comes from Oakland California, near to where the series is based. Series creator Jeremy Bronson mentioned both rappers when discussing where Courtney the character came from. "I knew Daveed was part of all sorts of community groups and these small collectives doing music together," he said, "And then when I read about Chance also starting out doing his poetry in the multi-purpose room of his high school, I thought it was very, very interesting."

I don't know about Chance the Rapper, but Diggs has a very big role in the creation of the series. Along with acting as one of the executive producers of the show, he is also writing original music for it, particularly Courtney's raps. He is also coaching Hall on how to deliver the raps, as the actor doesn't have rapping experience. That tidbit alone would be enough to make me watch the show if it wasn't already on my list.

So no, the series is not based on one particular story that ever happened. But the story of a talented young rapper from a disadvantaged background making it big? A publicity stunt gone awry? An accidental political win? Those are stories that are very much true to life, and The Mayor hopes to do justice to all of them. Based on some of the early reviews of the series, which have been extremely positive, I have faith that it will do just fine.