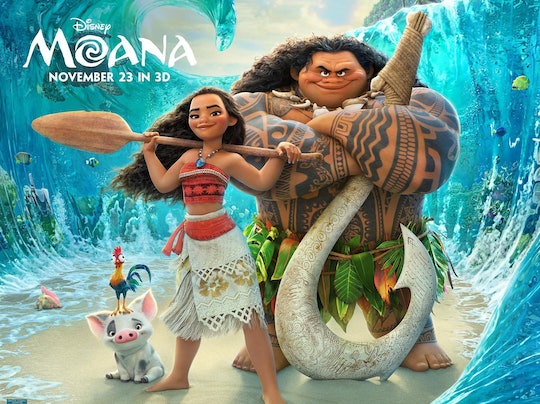 Is The 'Moana' Soundtrack On Spotify? You Can Now Stream Every Song

The holiday season has been graced with a new Disney animated film that is sure to capture the hearts of millions. So much so that you may find yourself humming just about every single song from the Moana soundtrack. Personally, I think I need some form of musical rehab because I cannot stop listening to Disney's Moana soundtrack. It calls to me like the ocean calls to Moana. OK, that's pretty corny, but I'm seriously addicted. If you're anything like me, who can't get enough of songs like "How Far I'll Go," or are curious to hear the new jams, you're probably asking yourself if the Moana soundtrack is on Spotify.

Don't worry too much, the answer is yes! You can get your rhythmic fix of Lin-Manuel Miranda, the Tony-award winning Hamilton writer, on Spotify. All of the film's music was recently released in anticipation of the film's release. Strangely, it's a little tricky to find the full soundtrack, though. For some reason it's easier to type in the song titles rather than Moana itself. To help you along, you can find a full list of the songs on Spotify below.

My personal favorites from the score are Alessia Cara's "How Far I'll Go," Jordan Fisher's "You're Welcome," and Lin Manuel's "We Know The Way." You can also take an ear to Dwayne "The Rock" Johnson's version of "You're Welcome," which is just as good — I still can't believe he can sing. You can listen to that here. But prepare yourself before listening to the musical masterpiece because you might feel like conquering the world, or dancing (there is no in between), as you're grocery shopping.

The track-list inspires all of our inner Moanas. Many of the tracks run at a fast-pace to match the urgency of the film. As a result of tension in the plot, not all songs are as playful as Lilo and Stitch's "Hawaiian Roller Coaster" ride. Given this, a sense of focus, purpose, and drive is appropriately embedded into the songs Moana sings.

Other songs provide a strong sense of adventure. Lin Manuel's "We Know The Way" makes you feel as if you are a voyager aboard a canoe with Moana and pesky Heihei. Hop aboard her boat via the track-list below, and sail into theaters with Moana Nov. 23!