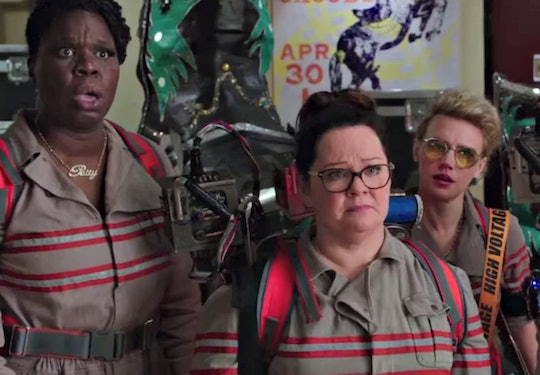 Is The New 'Ghostbusters' Appropriate For Kids? Expect Bigger Scares In The Reboot

While the internet debates whether the Ghostbusters reboot will be good, parents have another question: will it be scary? Anyone who saw the PG 1984 flick likely recalls the campy creepiness that balanced scares with silliness; it's likely that Slimer and the Stay Puft Marshmallow Man didn't go on to inhabit many nightmares. Over the past three decades, special effects evolved and comedy got a bit more bite. Is Ghostbusters appropriate for kids?

More Like This
Everything You Need To Know About The Rugrats Reboot
How Close Are We To A COVID-19 Vaccine For Children?
Therapist Says: Alone Time For Moms Is A Necessity, Not An Indulgence
Exclusive: Teen Artist Tyler Gordon Reveals The “Ultimate Hero” He Wants To Paint

The 2016 Ghostbusters is PG-13; according to IMDb, the rating is for "supernatural action and some crude humor." In an interview with Empire, director Paul Feig said that he'd wanted to make it a rated-R film but decided instead to make it accessible to as many audience members as possible, Comic Book reported. Feig did opt to up the intensity: "I want ours to be scarier than the original, to be quite honest," he said. "[Screenwriter] Katie Dippold and I are so focused on wanting to do scary comedy. We don't want to hold back." He did add that it won't be nearly as terrifying as a true horror movie; the new Ghostbusters just has some edge. The Heat writer Dippold told the Los Angeles Times that she knew writing Ghostbusters would be a challenge, but she committed to infusing it with the same spirit as the original:

I've always loved horror comedy, and I think it's really hard to pull off. Ghostbusters is so special to me 'cause there's an umbrella that holds both fun and scary.

Based on the rating, a high schooler should be able to see it without running home screaming; younger kids may end up sleeping with the lights on for a few nights. But, as with all media, the fear factor varies from child to child, and it may help parents to gauge their kids' reaction by streaming the trailer at home.

It seems as though the summer blockbuster may be worth seeing on the big screen. Based on reviews of Ghostbusters, Rotten Tomatoes gave the movie a 75 percent rating. Though detractors attacked the film for casting an all-female team of paranormal investigators, kids may benefit from seeing four strong, funny women take charge of both a fictional ghost invasion and a real-life major motion picture. In the words of movie critic Manohla Dargis in her New York Times Ghostbusters review, "Girls rule, women are funny, get over it."

As with the original Ghostbusters, it's likely that any kid who is easily spooked may not do well with the skeletal spectres of modern Manhattan. But with more and more children delighting in video game jump scares and shocking TV shows, a few fearsome phantoms may be more fun than frightening.