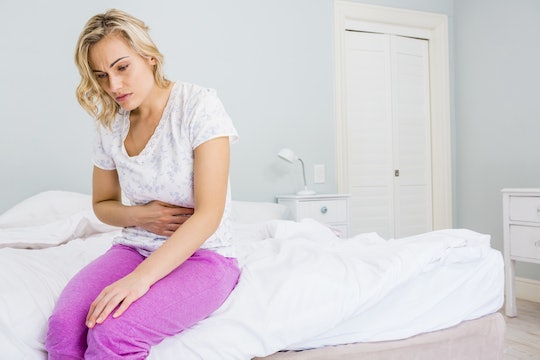 Here's The Major Difference Between The Norovirus & The Flu

Running away to an isolated tropical island sounds really good right now, because winter is still in full effect, and so are the nasty viruses that come with it. This season has been especially brutal, with colder than normal temperatures, lots of snowy fronts, and a flu epidemic that has parents anxious. With the flu spreading like wildfire, any symptoms of illness may have you rushing to the doctor’s office. But if your doctor tells you that the illness you are dealing with was caused by a norovirus, you might wonder, is the norovirus the flu?

In an interview with Romper, Chicago area pharmacist, Bineesh Moyeed Pharm.D says that although they are both viruses, the norovirus and flu are quite different and unrelated. She says that even though the norovirus is sometimes referred to as the “stomach flu," it has no relation to the influenza virus that causes the flu. "Norovirus causes pain and inflammation in the stomach and intestines,” explains Moyeed, “while the influenza or flu virus infects the respiratory system.”

Moyeed notes that with the flu, or influenza virus, it is more common to see fever, body aches, a sore throat, congestion, coughing, and sometimes vomiting or diarrhea. With a norovirus, however, she says you are more likely to experience abdominal pain, nausea, vomiting, diarrhea, a fever and chills, but without the respiratory issues of a flu virus. “If you start out by experiencing a runny nose or sore throat, you likely have an allergy, a cold, or a flu virus,” says Moyeed, “but if your symptoms are mostly gastrointestinal, it’s likely a norovirus or food poisoning.”

This year’s flu strain is a little different, which is why some people may be confused about what illness they have. Moyeed says that the virus creating all the panic is this season’s predominant flu strain, H3N2, which has more severe symptoms than other strains. The H3N2 strain seems to cause similar symptoms to the norovirus in some people, she explains. “On top of all those yucky respiratory symptoms, this strain can also cause mild gastrointestinal distress as well.”

Both the norovirus and the flu virus are highly contagious, says Moyeed, so it’s very important to keep yourself and others around you well protected. In the case of a norovirus, the Centers for Disease Control and Prevention (CDC) recommended washing hands (especially after using the bathroom or changing a diaper), cleaning any contaminated surfaces, and avoiding cross contamination through foods and drinks. For the flu virus, the CDC suggested that along with covering your coughs and practicing good hand hygiene, you should protect yourself and your family with a flu shot. Although the effectiveness of the flu vaccine can vary depending on the strain you are exposed to, explained the CDC, it can reduce the risk of catching the flu by 40 to 60 percent.

With the onset of any symptoms, Moyeed suggests heading to the doctor’s office as soon as you can. “Your doctor can test you for the influenza virus,” says Moyeed, “and treat you with an antiviral if feasible.” She says that antiviral drugs like Tamiflu are the most effective when they are administered within the first 48 hours of the onset of symptoms. “If taken at the right time,” she adds, “these antivirals can provide some relief to your symptoms and may quicken your recovery time.”

So while the norovirus and the flu are not the same thing, they do equally suck. The best thing to do when you, or anyone in your family, is feeling sick is to get evaluated by your doctor so you can get the best treatment advice. As nice as a remote island getaway might sound during the winter flu season, it’s not really practical, so a bottle of hand sanitizer and a flu shot will have to do.