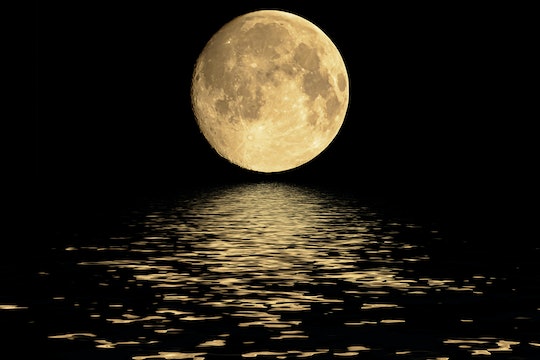 If You're Hoping A Full Moon Will Send You Into Labor, Here's What You Should Know

By the time pregnant women get to that last month before their due date, they will look for any hopeful sign that labor may start soon. Late in their pregnancies, women have been known to drink castor oil, go on bumpy car rides, take a long walk, eat spicy food, and have sex, all in an attempt to incite labor. Given this desperation, it makes sense that you would find hope in any old wives' tales about giving birth on a full moon.

The most popular old wives' tale is that on the night of a full moon, more women's water will break than usual, and they will go into labor. Despite this sounding totally feasible, sadly, there's no scientific evidence that full moons, or supermoons even, bring on labor. "On a busy night in labor and delivery, it’s not uncommon for us to wonder if it’s a full moon, but it’s just a coincidence, if anything," OB-GYN Dr. Candice Fraser of Your Doctors Online tells Romper. "But busy nights happen whether or not it’s a full moon."

A research study published in 2001 by an astronomer and physicist named Daniel Caton found no link between lunar cycles and birth rates. Amy McDonald, director of Duke University Midwifery Services, told BabyGaga, "There are lots of belief systems and cultures around the world linking the cycle of the moon and women’s fertility." Our periods often do align with the lunar cycle, but that doesn't then translate into anything that sparks labor. And Fraser tells Romper that there is some connection to a stormy night and women having babies. "There is data that shows lower barometric pressure can induce rupture of membranes, so there is a scientific reason if we see more women in labor during storms."

Understandably, pregnancy and old wives' tales go hand in hand. Old wives' tales were often invented or evolved out of the need to understand something that was hard to understand. Your grandma or your great aunt might not understand your use of apps to order dinner for the family, or the fact that you don't get a print newspaper because you can catch up on all the current event events online. They can, however, relate to growing new life inside of you and might still even remember the urgency you feel as you approach the finish line and the desperation to get that baby out. And back when they were with child, all their tricks were spread through word of mouth, and they were probably willing to believe and try anything to induce labor.

Anecdotally, labor and delivery nurses will tell you that when there's a full moon, they prepare for a busy night, though there is no scientific rhyme or reason why. Some people argue that since the moon causes the tides, the gravitational pull can influence labor. According to Live Science, "there's no measurable difference in the moon's gravitational effect to one side of your body vs. the other," so don't expect a moon to pull that baby towards it like the tide.

If you are rooting for labor to start and hoping that the next full moon will hasten that, it certainly could happen. But there's also a chance you will still be pregnant the next day. In which case, it's time to break out the spicy foods and call your partner. And even if those also don't bring labor, at least you had a good meal and some sex.

More Like This
Pitocin Induction: What It Is & The Play-By-Play
Can Swimming Induce Labor? Experts Weigh In
How Long Does It Take For Sperm To Induce Labor?
This Is How Your Water Breaks During A C-Section

This article was originally published on November 17, 2017