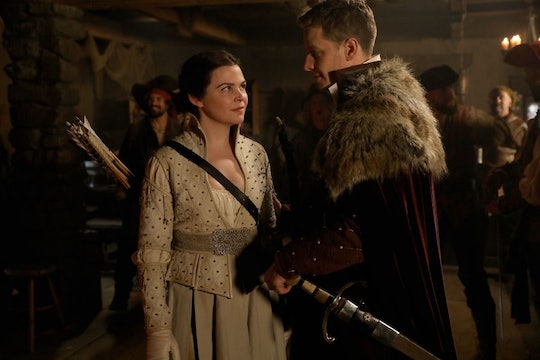 The 'OUAT' Cast Will Showcase Some ~Magical~ Vocals

Once Upon a Time is bringing the music to Sunday night's episode. According to the episode synopsis, flashbacks will find Snow and Charming making a special wish that Emma will be protected, which results in the entire kingdom bursting into song. This, of course, infuriates the Evil Queen. But will the Once Upon a Time cast really be singing in the musical episode? It sure looks that way.

Because the songs are originals, they're all tailored to the character that sings them. For example, in the sneak peek of the episode, Hook bursts into to song to tell Snow and Charming specifically why he won't take them onto his ship and help them. He also sings about his pirate life and his thirst for revenge against Rumple.

The song is incredibly catchy and if you were unaware that O'Donoghue could sing before, there's no doubt about it now. (As if fans needed another reason to love him.) Besides Hook, OUAT executive producers Adam Horowitz and Edward Kitsis promise the Evil Queen, Snow, and Charming will also get their own tunes. However, there's one character's singing abilities that remain a mystery.

When asked if Rumple will sing in the episode, Horowiz and Kitsis played coy, saying fans will just have to wait and see. But if you ask me, it'd be surprising if he doesn't. Fans may be shocked to know that Carlyle has a really nice singing voice. In the 2012 film California Solo, he sings the title song, which is even featured on the film's soundtrack.

It's clear the whole OUAT cast is multitalented and it'll be fun to see these characters singing their hearts out. Though the spell that causes the singing occurs in Snow and Charming's flashback, there will also still be plenty of singing in the present and fans can probably expect to hear Emma and Henry singing at the wedding, since they're the only ones who couldn't be in the flashbacks.

You can see and hear all the musical numbers when Once Upon a Time airs on Sunday, May 7 at 8 p.m. ET on ABC.