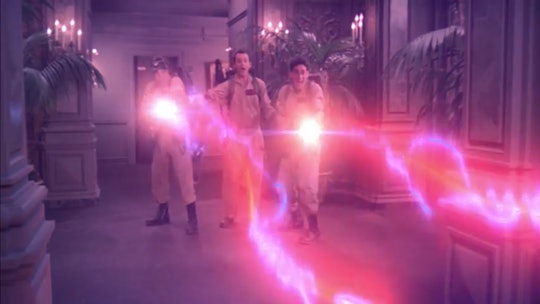 Is The Original 'Ghostbusters' Too Scary For Kids? It's A Necessary Classic For Families

With the Ghostbusters reboot just around the corner, plenty of fans are preparing by rewatching the original 1984 film. For some, it's been a while, so before making it a family movie night, parents are struggling to recall if the original Ghostbusters is too scary for kids. While the special effects were nearly Oscar-worthy at the time, that was over 30 years ago, and today's kids aren't likely to be too impressed with the ghosts themselves. There are a few spooky ones, but the real standouts, Slimer and the Stay Puft Marshmallow Man, are downright cuddly. Still, parents should screen the movie and decide on a kid-by-kid basis before letting their kids watch it.

There are a few things to consider with Ghostbusters, in part because it wasn't actually made for kids, and also because the '80s were a different time. For instance, although it's becoming increasingly rare to see smoking in a movie that's "youth rated" (anything under R), in Ghostbusters, which is rated PG, it's hard to find a scene when somebody's not smoking. They literally smoke while busting ghosts. There's also a healthy dose of swearing, and we're talking everything except the big ones. Some parents might be OK with their kids hearing the S-word and the A-word a handful of times, but others could be uncomfortable explaining exactly what body part the guy from the EPA is alleged to be missing (hint: it's not his arm).

Another issue with Ghostbusters that might make today's parents more uncomfortable is the sexual innuendo. Fans who haven't seen it in years may have forgotten the unfortunate scene where it's not explicitly shown, but heavily implied that Ray receives oral sex from a ghost. But the whole scene is less than 30 seconds long, and the worst of it clocks in at under 10 seconds, so that might be a good time to stand up in the middle of the living room and loudly start asking who wants popcorn. Harder to avoid is the two-minute scene where Dana is possessed by Zuul, and attempts to seduce Peter, throwing him on a bed and straddling him while saying things like "take me" and "I want you inside me." Yikes. Might be a good time to throw out a "Who wants candy?!"

But back to the scare factor. Honestly, the scariest thing about the original Ghostbusters is probably the very first ghost our heroes encounter at the library, and that's more of a startle than a scare. Yes, she's some sort of skeleton demon, but compared to the CGI today's moviegoers are used to, she looks pretty silly. If kids can handle her, and parents don't mind a bit of sex, smoking, and swearing, it's still a great family movie.